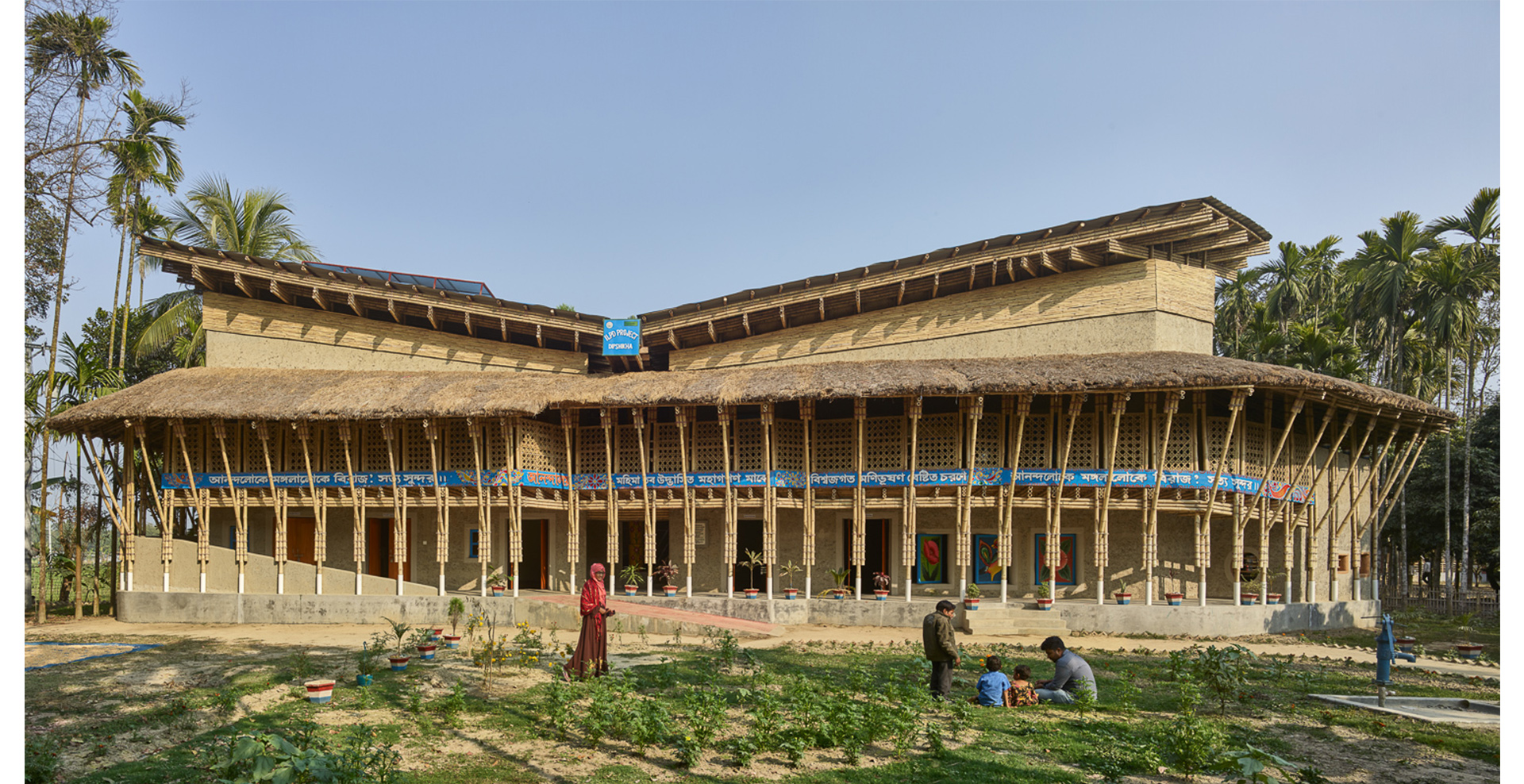 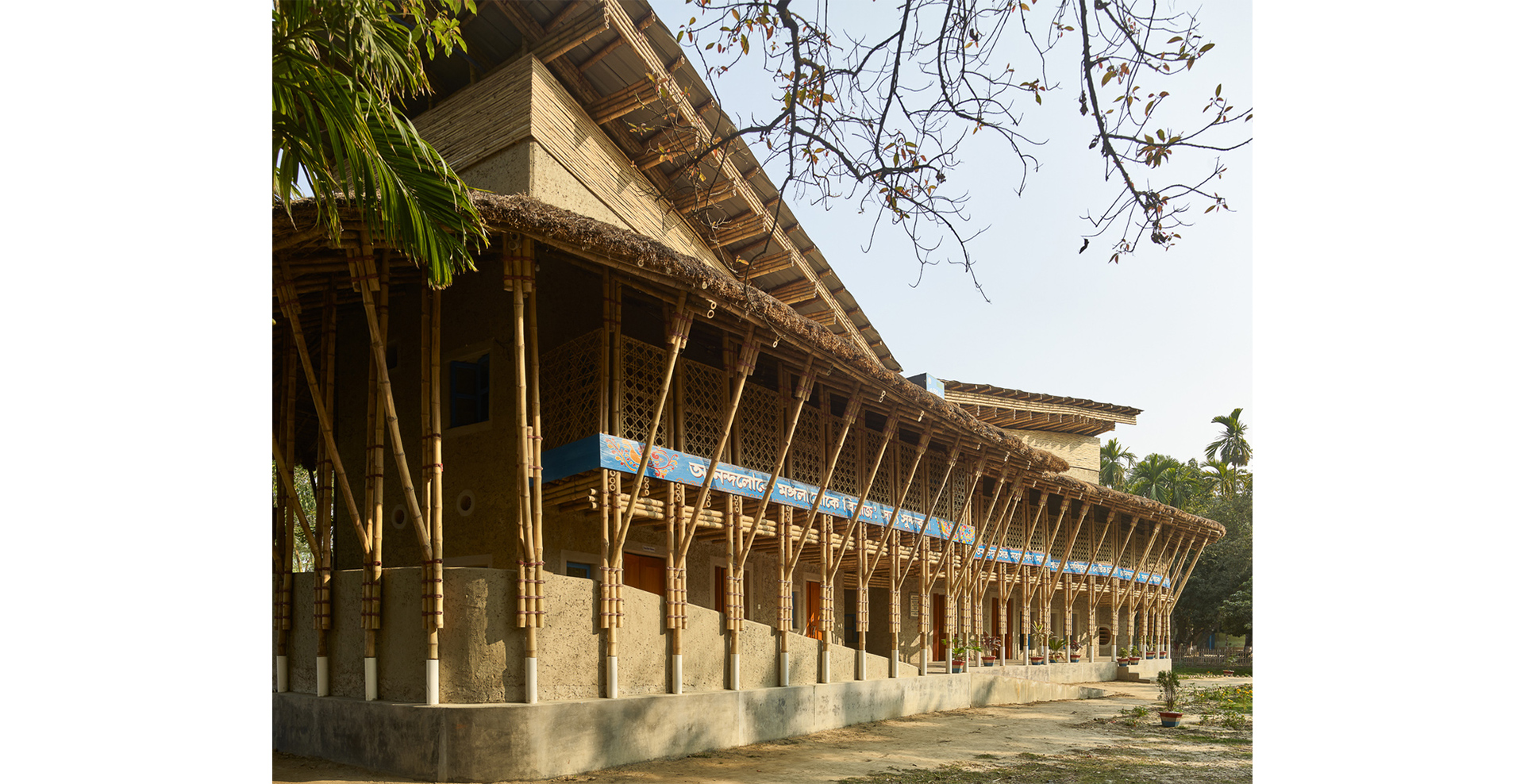 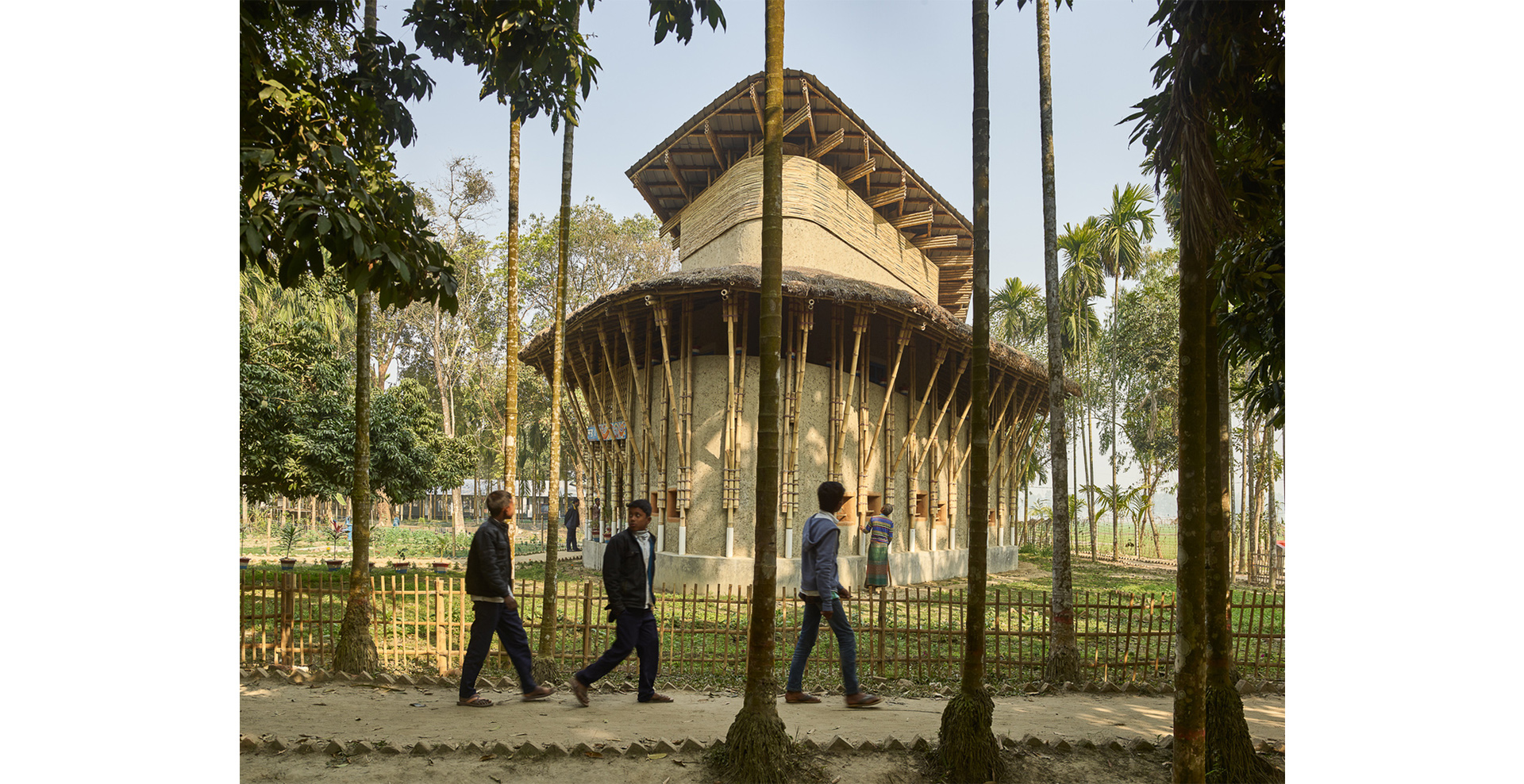 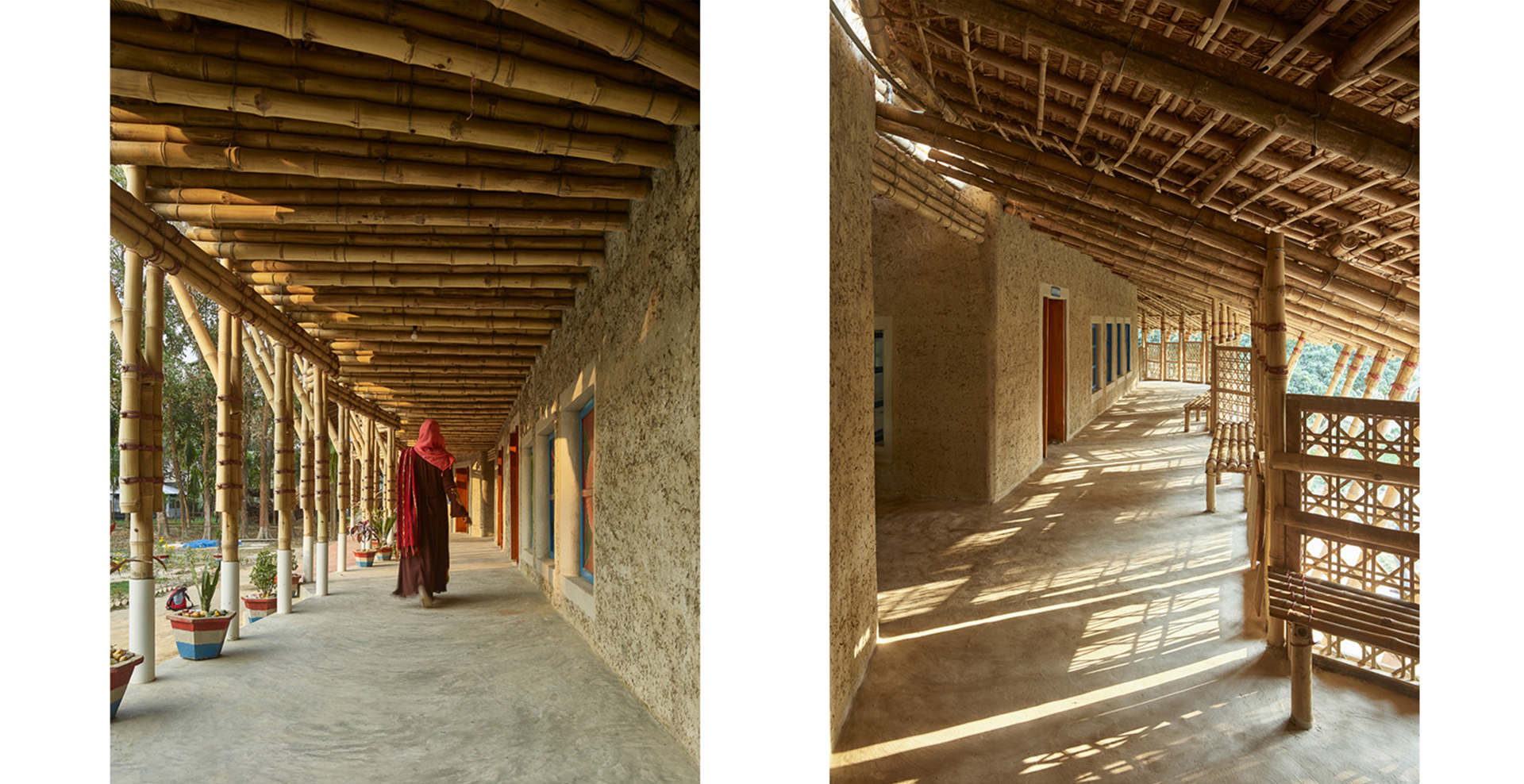 Anandaloy Center by Studio Anna Heringer hosts a haven for people with disabilities, combined with a small studio for the production of fair textiles (Dipdii Textiles). For Studio Anna Heringer, architecture is a tool to improve lives. The strategy of all of the projects, no matter if in a European, Asian, or African context, is the use of local materials, local sources of energy (including manual labour), and global know-how. Because the Anandaloy project is mainly built out of mud and bamboo from local farmers, the biggest part of the budget was invested in local crafts(wo)men. Thus, the building is much more than just a structure; it has become a real catalyst for local development. Often, disabilities in Bangladesh are seen as a kind of punishment and challenge from God or bad karma from a former life. Because of this, they are rather hidden than included. Besides this, poverty forces every grown-up member of the family to work, and mostly differently-abled people are left on their own during the day. Therapy places are rare in the country and do not exist at all in this rural area of Rudrapur.

This project is the accumulation of the learning processes of all five previous projects in Rudrapur, including METI School. Unlike the other projects that were under German supervision, the site was managed by the Bangladeshi contractor, Montu Ram Shaw, and a team of mud and bamboo workers from the village, including some differently-abled people. As for Studio Anna Heringer, know-how transfer is key, and this project is great proof that the knowledge is now really rooted. In the beginning, the building was planned as a therapy centre, but the designers were able to extend the building into another story, hosting Dipdii Textiles, a studio for the female tailors in the village. This part of the building’s programme is co-initiated and taken care of by Studio Anna Heringer to allow women to find work in their villages. It is an effective countermeasure to urban-rural migration. The concept was to provide therapeutic treatment for the differently abled people and offer them an opportunity to learn and work in that building and engage in the community there. Everybody wants to be needed.

As a visible sign of this inclusion, a big ramp winds up to the first floor. It is the only ramp in that large area. During the construction, it had been a topic of discussion among several local visitors who were coming to visit the site. What is the reason for that ramp? Why is it important to guarantee access to everyone, whether they are healthy or not? How can the lives of people with disabilities be improved? How can inclusivity be incorporated? The architecture of the built site explores the plastic abilities of mud to create a stronger identity. Mud is regarded as a poor, old-fashioned material, inferior to brick. However, for Studio Anna Heringer, it doesn’t matter how old the material is; it is a matter of one’s creative ability to use it in a contemporary way. To show the beauty and capacity of mud, one needs to bring out the best of it and not just treat it as a cheaper version of brick. With a particular mud technique called cob, no formwork is needed, and curves are just as easy to execute as straight walls. Unlike the other buildings in that area that are erected in a rectangular layout, the Anandaloy building breaks out of the mould. It dances in curves, and the ramp winds playfully around its inner structure. On a symbolic level, the building signals that it is great that we human beings are all different. With its joyful curves, it radiates the message that diversity is wonderful! 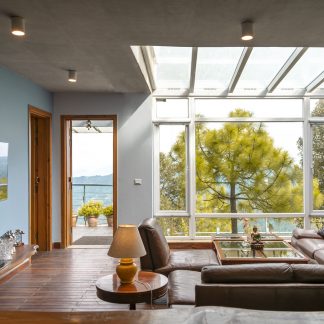 ‘In the Mountains’ by… 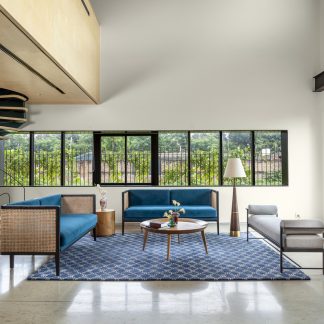 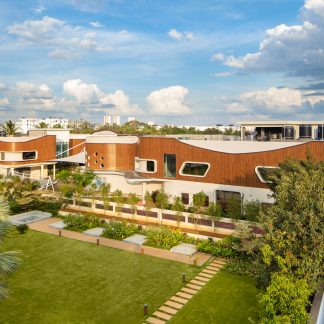 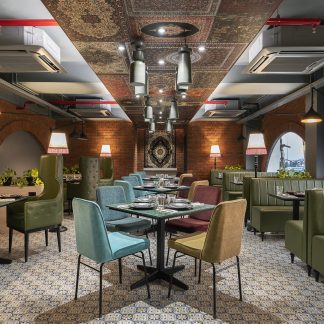 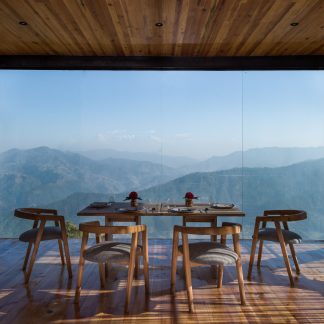 The Kumaon by Zowa… 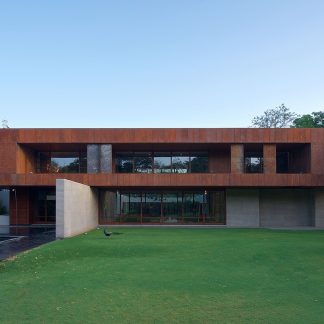 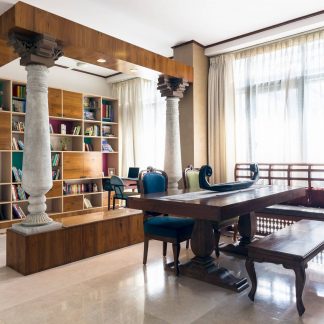 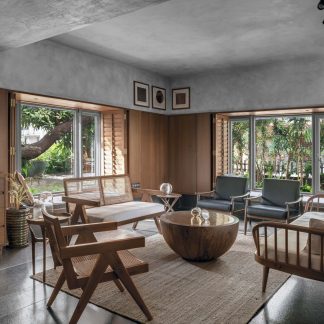 The Axial House by…

The Northstar School by… 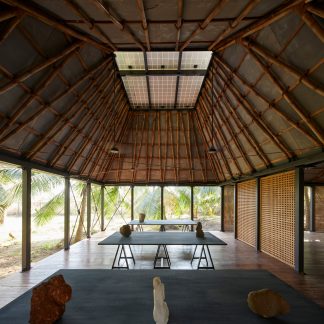 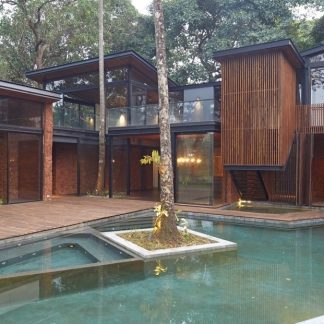 Villa in the Palms… 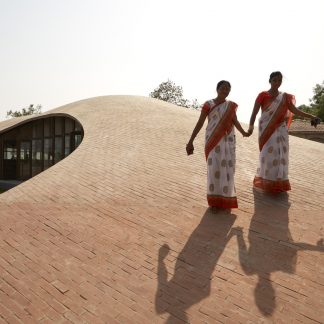 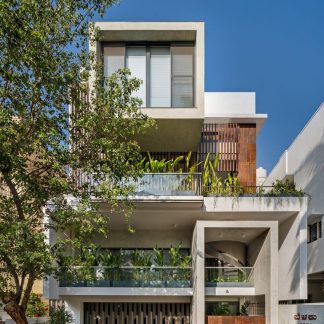 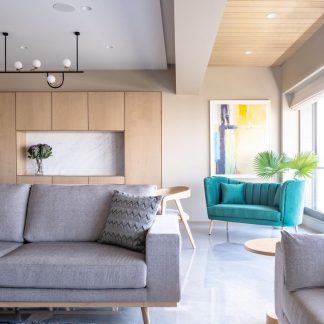 The Fluid Home by… 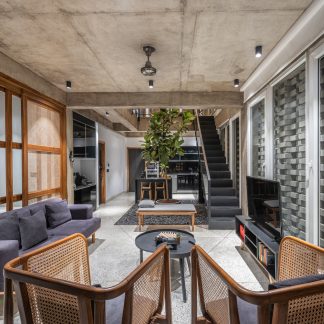 The Soaring Rock by… House In The Farm…

In light of the impact of the Covid-19 pandemic, one has come…Read More The Box House by…