Hosted at UB City, the ninth edition of Art Bengaluru saw over 150 creations by 21 artists displayed across Bangalore’s best known contemporary hub for luxury, art and culture. To say that this was an incredible art exhibition would be improvident, because it was so much more than that. It was a meticulously curated experience that not only showcased a diverse body of work from Indian, American, Saudi Arabian, Dutch and French artists, but also hosted talks, workshops, and the debut of Film Bengaluru—an International Film Festival organised in partnership with the UNESCO MGIEP.

Art Bengaluru was initiated in 2010 to get the regular city-dweller and the finest artists together, on neutral ground, eliminating the aristocracy that still exists in some galleries and museums across the world—and what better location for this than a mall. Spanning three floors and featuring paintings, hand-blown glass sculptures, installations, video projects, 3D printed sculptures, photography, mixed media and even digital art, the festival had something for every type of art enthusiast.

From an incredible performance by the Bangalore City Chamber Orchestra on opening night, to the mesmerising work by schizophrenic, autistic and even child artists, the ninth edition of South India’s leading contemporary art festival was quintessentially diverse. Scroll down for our picks of the best from Art Bengaluru 2019.

Haribaabu Naatesan
His works are an illustration of the Law of Conservation of Mass—matter and energy is neither created nor destroyed, it can just change in form. Through the artistic recycling of metal scrap and other detritus of consumption, he makes messengers out of garbage. The aim is to encourage people to think about materials and the quantity and kind of waste they discard. Despite the solidity of the material he uses, there is nothing static about his creations—creatures stalk, skulk, flit, flutter and sway while cars or machines wink, chug or simply move in concert.

Daan Oude Elferink
A self-taught Dutch photographer, he travels around the world to explore and capture the beauty of forbidden, decayed and abandoned places. The places he visits are not open for the public and danger often lurks. Keeping one door or window open in all his works encourages the viewer to imagine their own scenario of what may have happened in the space. These photographs were printed using a still-unnamed technique that gave them an extremely high-resolution finish. His photographs that demonstrate nature taking over the built structure can also be interpreted as a reverse metaphor for the Garden City.

Harshit Agarwal
An artificial intelligence and new media artist, he explores what he calls the ‘human- machine creativity continuum.’ In the ‘Masked Reality’ exhibit (sponsored by OnePlus) he explores the subject of faces, traditions and identity, especially its malleability in the age of technology and social media. His live interactive work and sculptures draw inspiration from the mask culture in various regions of India. In the ‘Latent Landscapes’ series he trained an A.I system to learn from a vast collection of landscape paintings which he curated, getting the machine to then create new landscapes from its learnt representation of the dataset. Nowhere in the process was the machine told any explicit rules about composition or colour. Eventually, he got a human artist to paint over all the areas of the print he defines as non-machinic, mimicking the print underneath, while leaving the unusual machinic details untouched by the human hand, thereby creating a techno-cultural dialogue.

To see more stunning work from all 21 creatives, visit www.artbengaluru.in 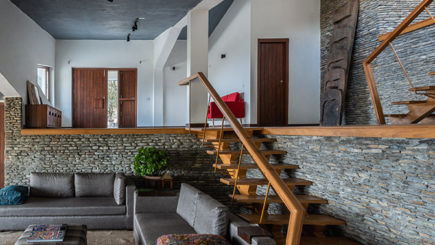 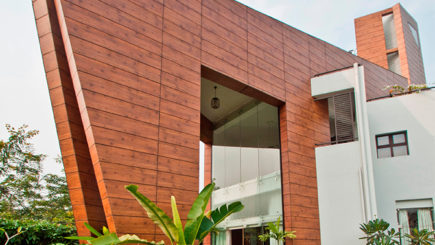 This Bungalow in Kurseong by DMA is a visual delight