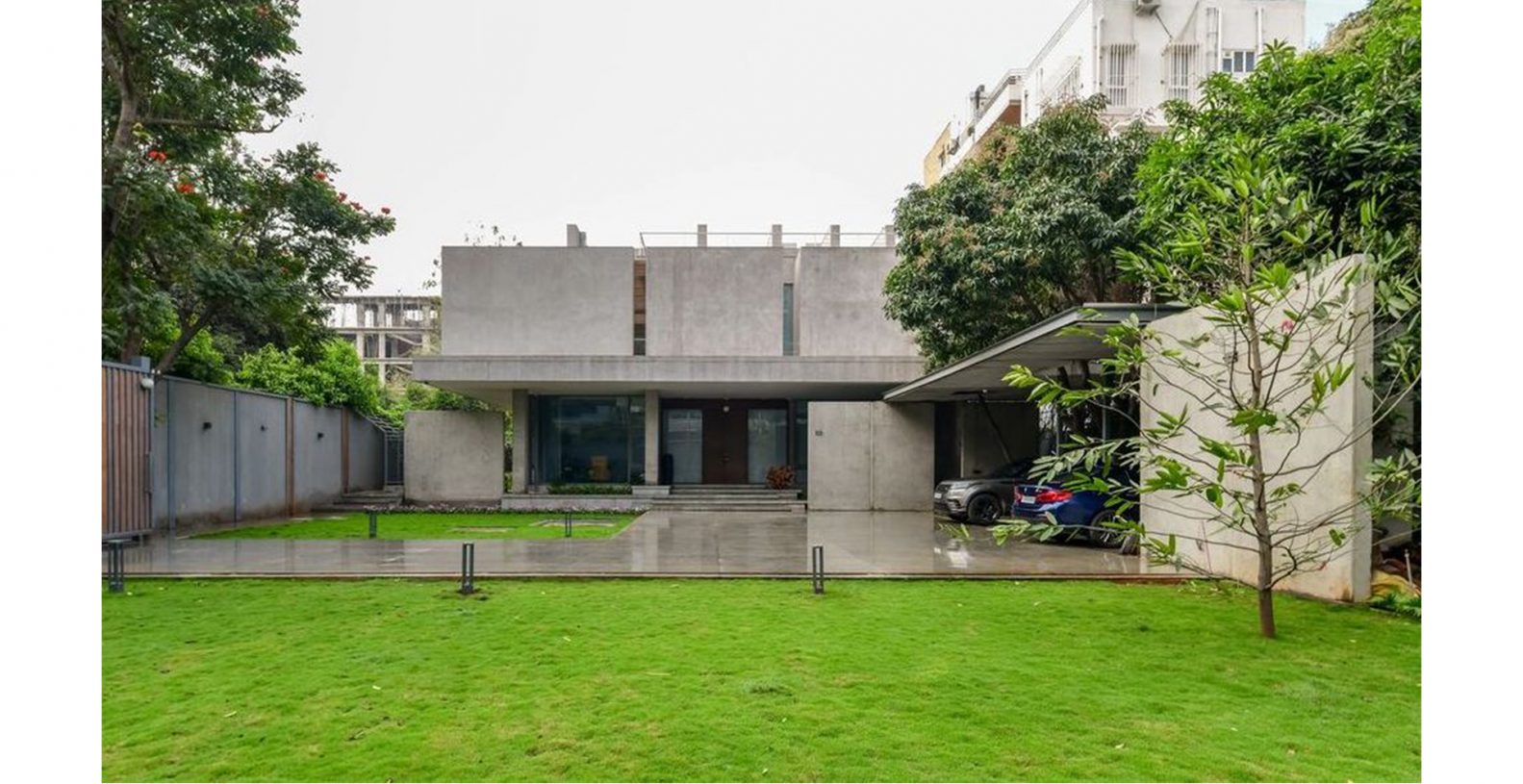 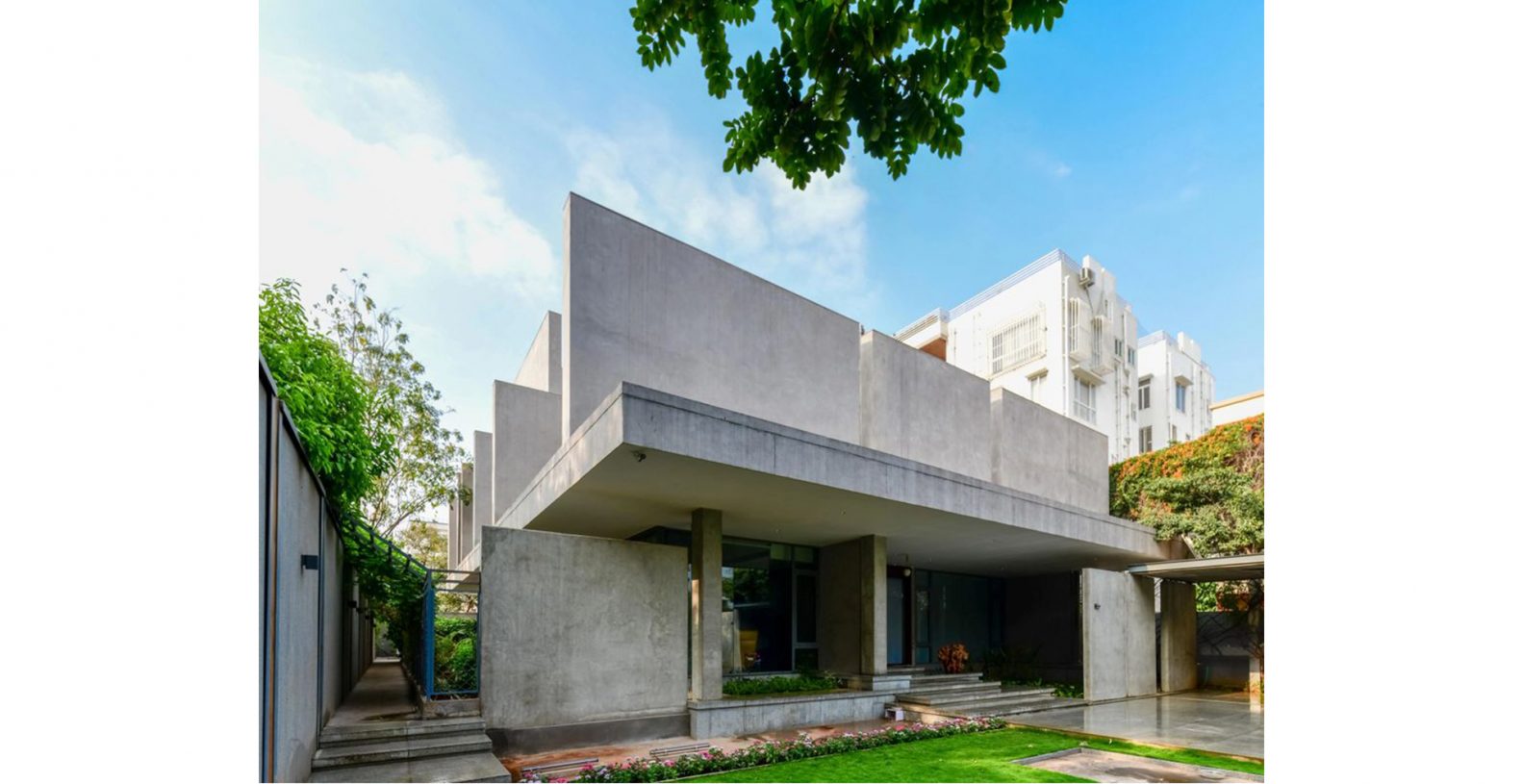 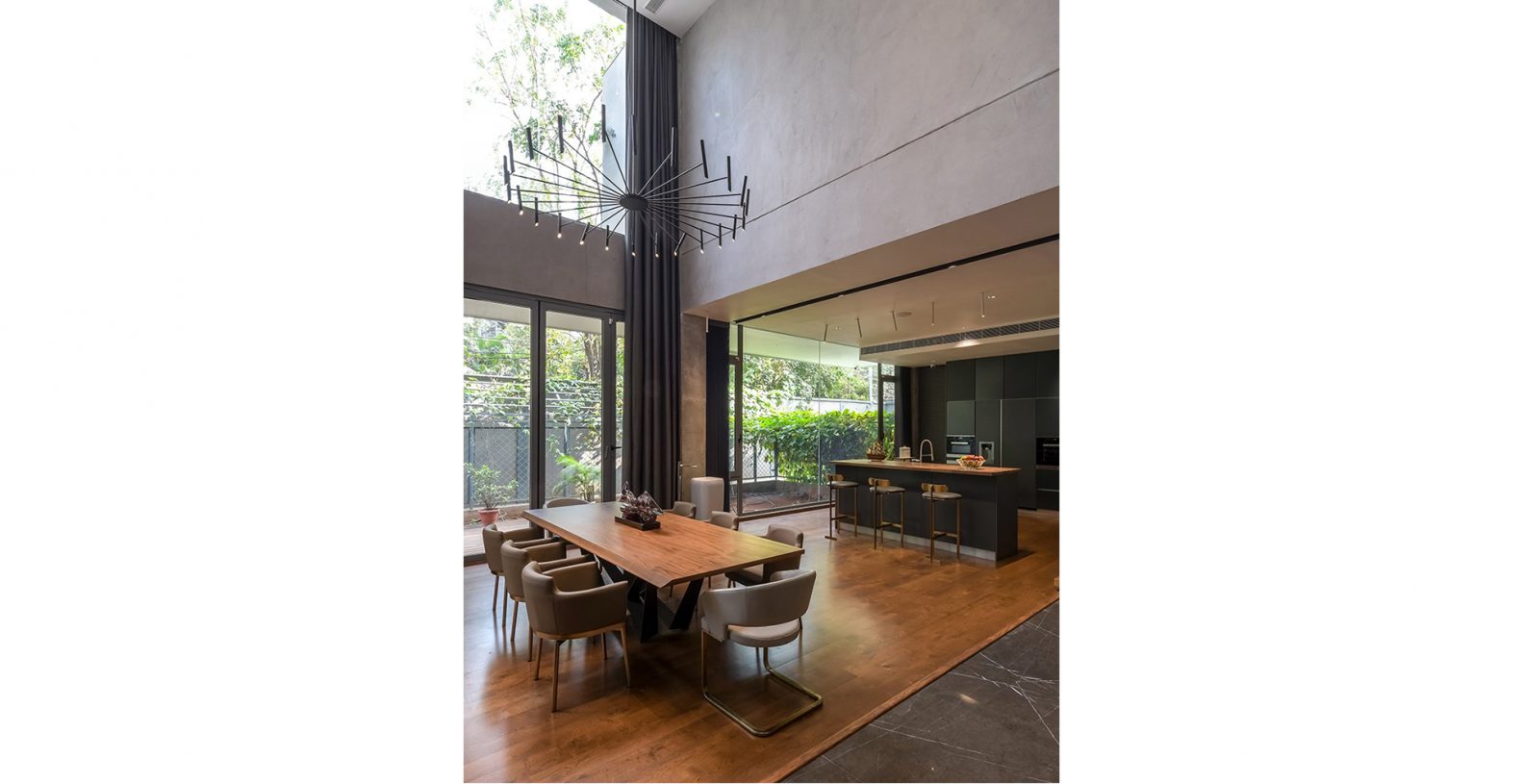 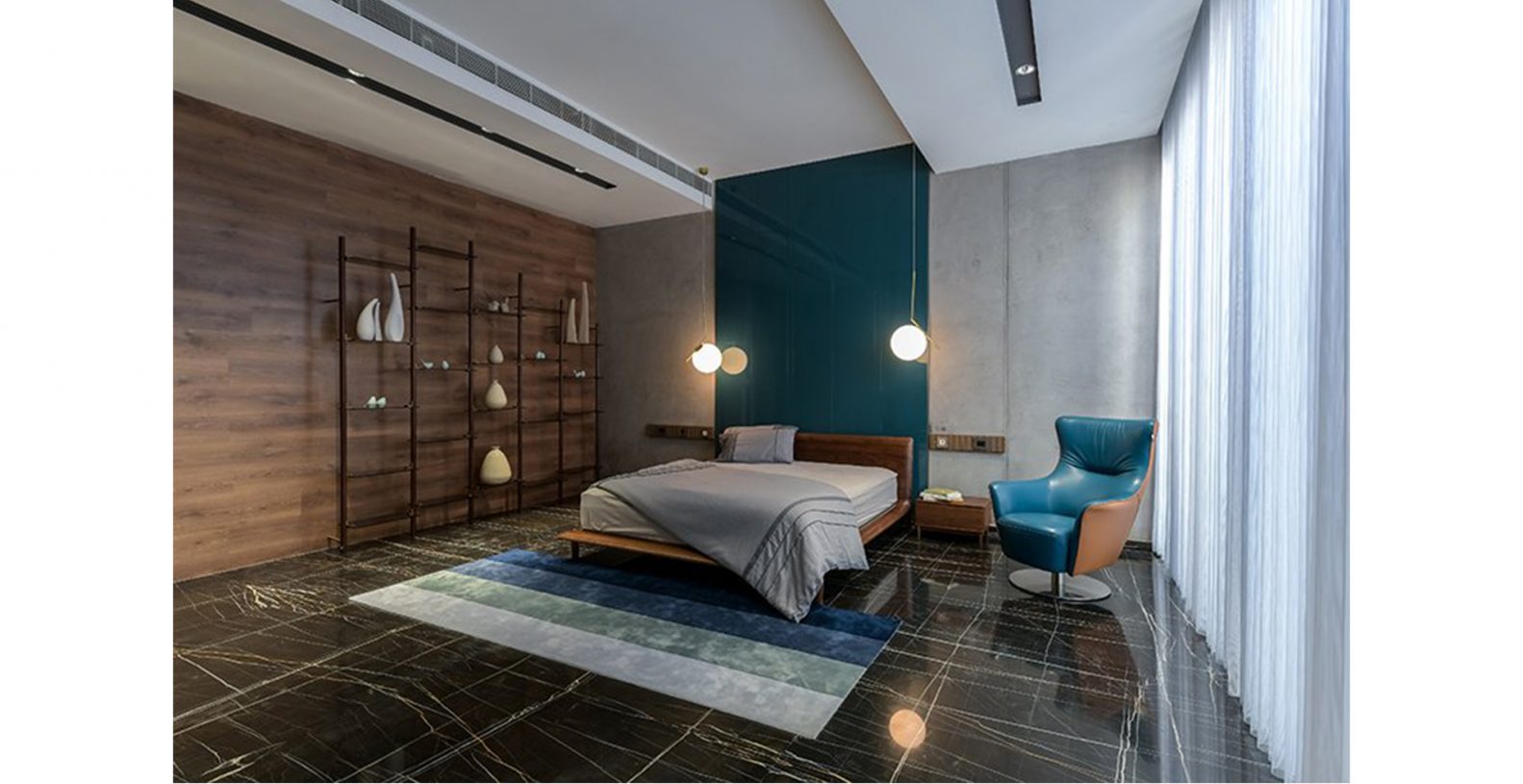 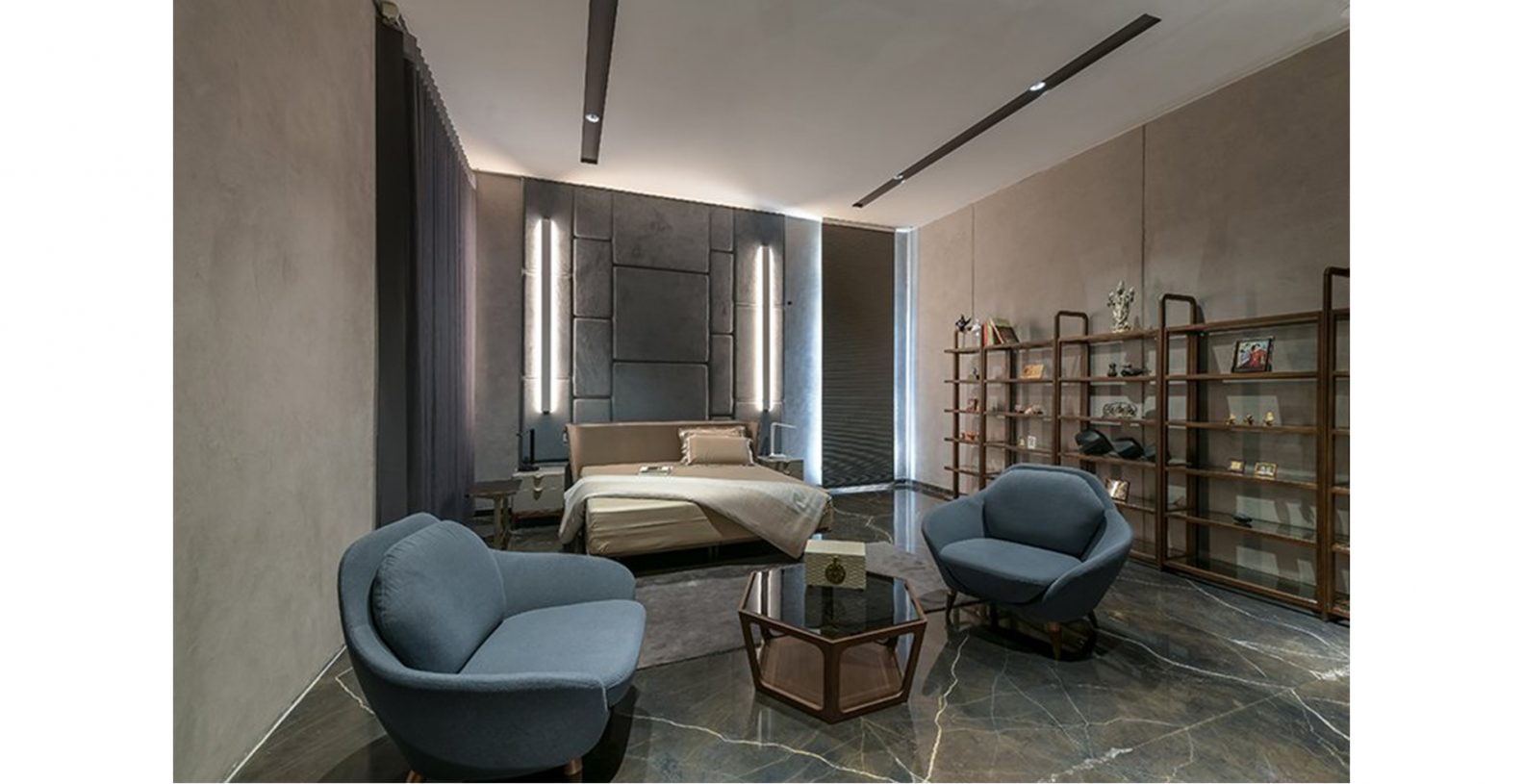 RH23 by Design Architecture Studios is a constructivist abode, where the design intent references a verse from the Katha Upanishad. More than a composition of walls, volumes and imposing materiality, the home is a powerful entity that recognises the immeasurable value of the lives it protects, but retains an almost effortless charm. The built tectonics showcase a clear layering of spaces one after the other, laid parallely to create a controlled spatial experience. The constructivist style of both thought and art have been perfectly translated in this project. Scroll down to read the Studio’s eloquent description of the project.

“Mind stands above the senses; farther on are its intelligences;
The Great self is in the beyond; the obscure Superior surpasses them at yond.”

One only realises ones own presence and thoughts as significant and worthy if they see the importance of the role that they play in the lives around them. Just as they choose to be more than just mind, more than intelligences, beyond the soul (atman) there lies the unconditional/obscure self; unknown and waiting. In the same manner the architecture of this home is not just its walls, volumes, or the mere imposing form of exposed concrete. Beyond solidarity of structure, it seeks a presence to resonate with.

Through the expectations of architecture springs the reason, direction and an innate want for meaning. A home according to Adrian Forty ‘stood for feeling, for sincerity, honesty, truth and love. This representation of the home involved a complete dissociation of all things good from the public world, and of all things bad from the domestic world. It was to turn the home into a place of unreality, a place where illusions flourished.’

From the very first layer of the building, the exterior, one experiences a sense of presence, created by the six sentry-like thick walls. An engagement is established with the visitor/passerby at this level itself. The dynamic perspective of the structure begins at the property line. Through an oblique presence it shifts, along with its heavy planes, from their perpendicularity to parallelity, as the viewer moves along the band of drive way to eventually stand right in front of the building.

The built tectonics show clear layering of spaces one after the other, laid parallely to create a controlled spatial experience. These planes are constructed in an orthographic manner to create the public, semi-open, to private spaces of the house-both transversely and longitudinally. In a manner, the connections between these start from the very outside, moving inwards  in series, and narrowing down at every stage. On the other hand, the spatial character of the volumes have a different significance altogether; they start with vast openness of the outside, to a controlled opening of the in-between, on to an expected openness, then to a double height volume, and finally a metaphorical isolation of oneself.

The state of being created is dynamic but outwardly looks static and stable! A paradox? The art style that influenced the work of this architecture also seems static to the untrained eye-but is it? In order to create the right tectonics, the specific style was employed for its ability to bring out the strength and the weight carried to their best capacities. 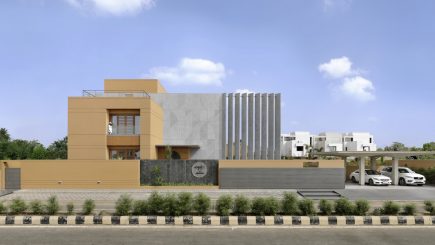 02, The Hidden House by A+T Associates 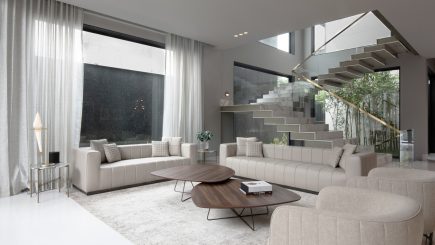 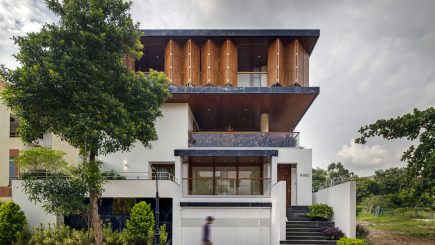 House of Voids by BetweenSpaces