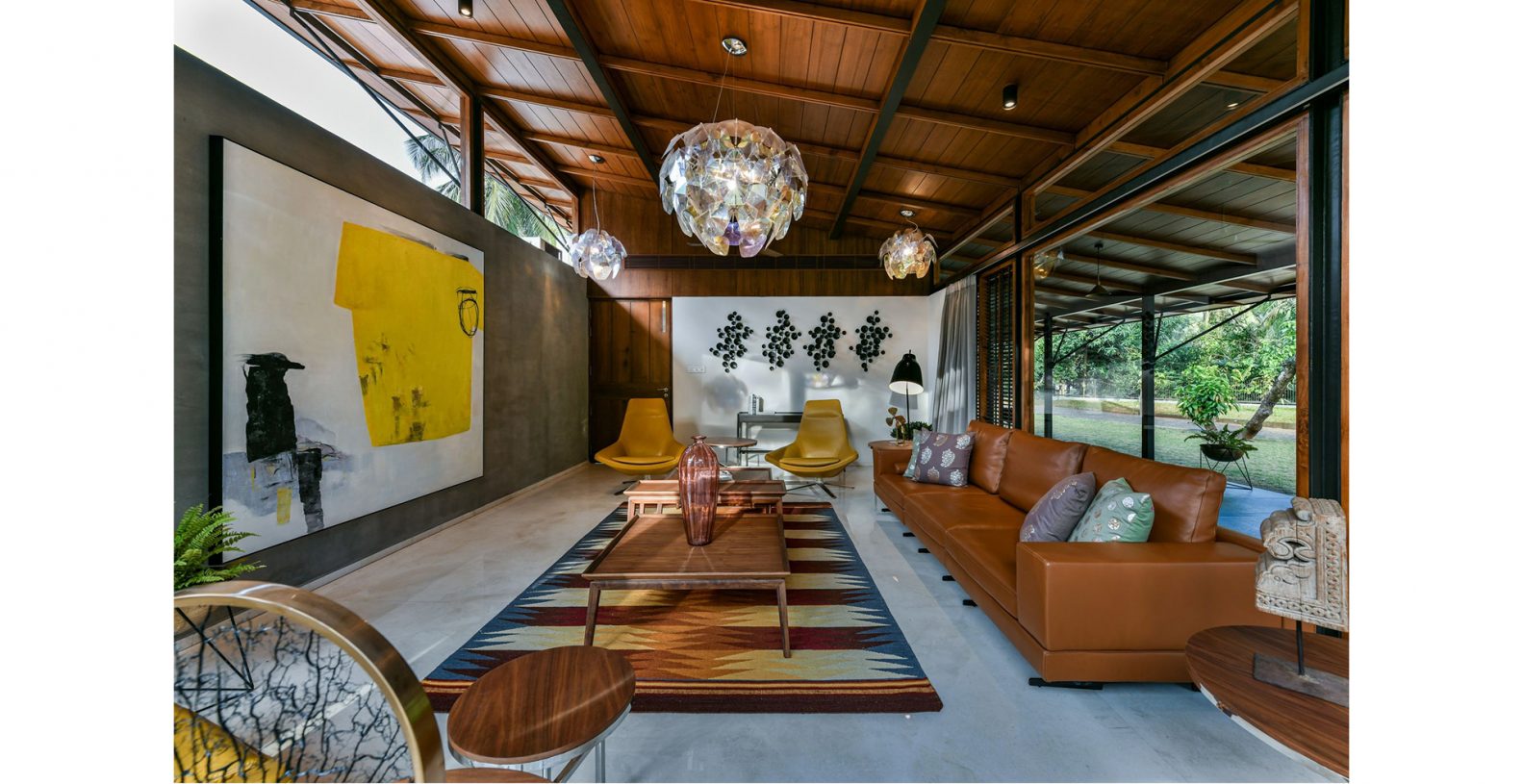 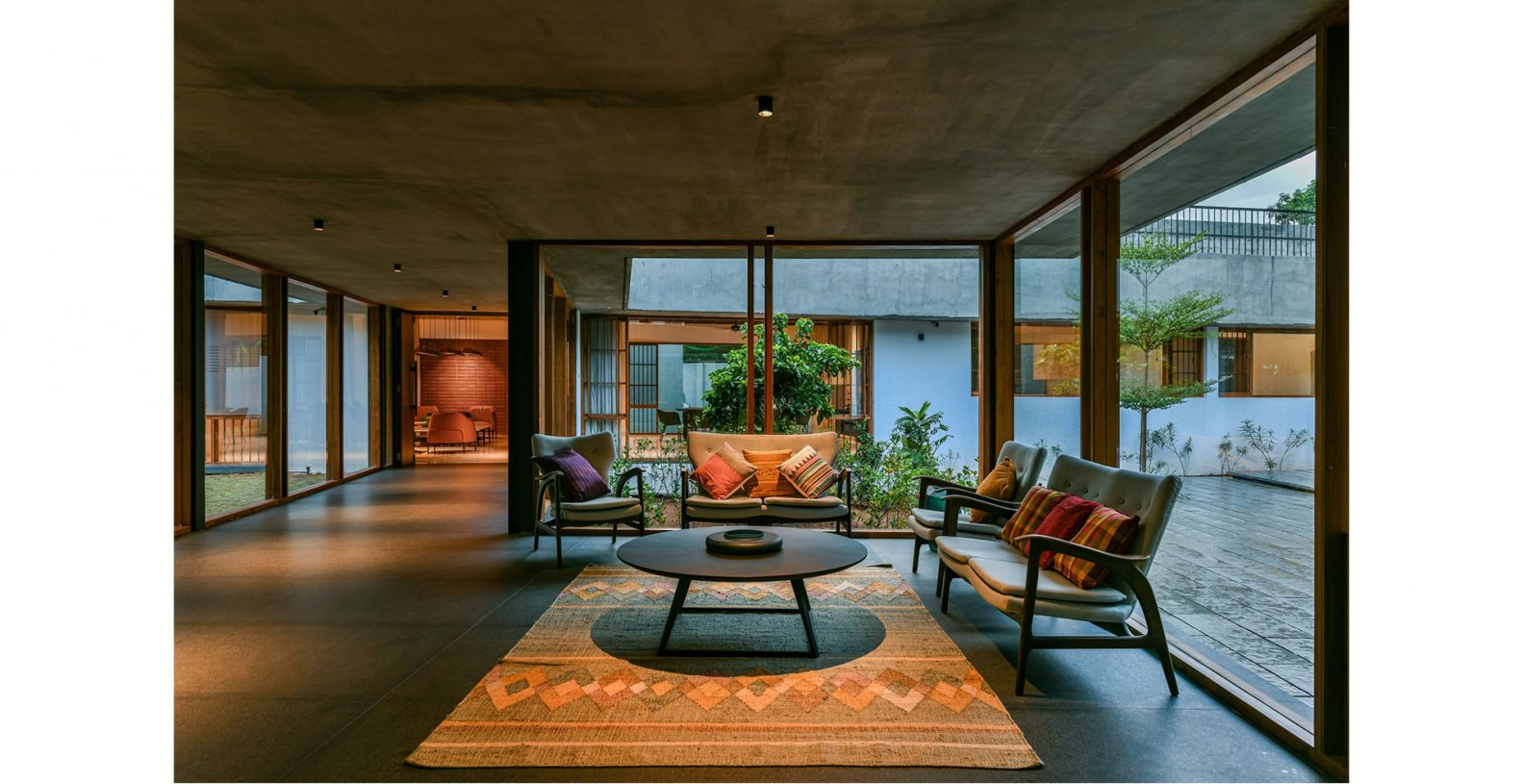 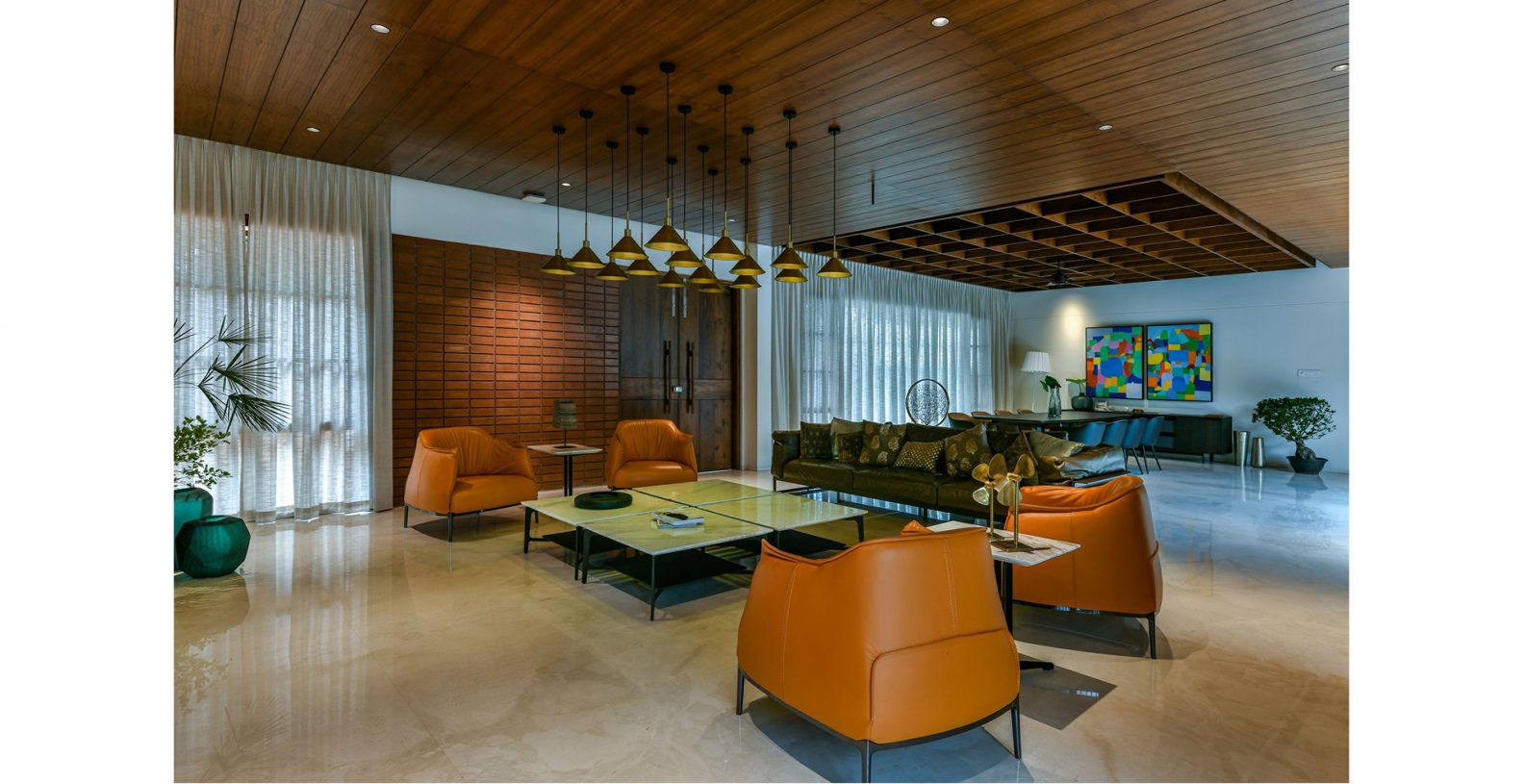 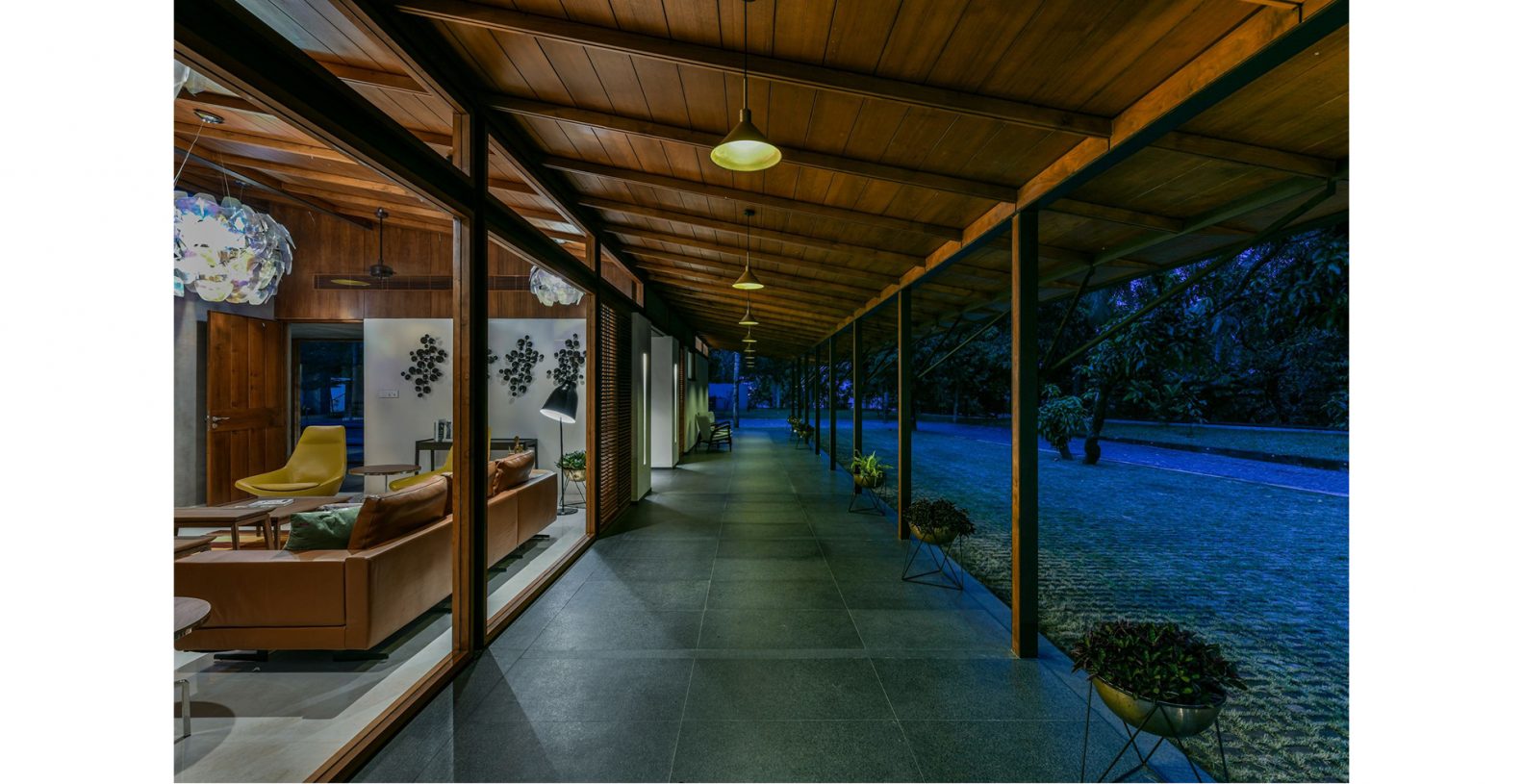 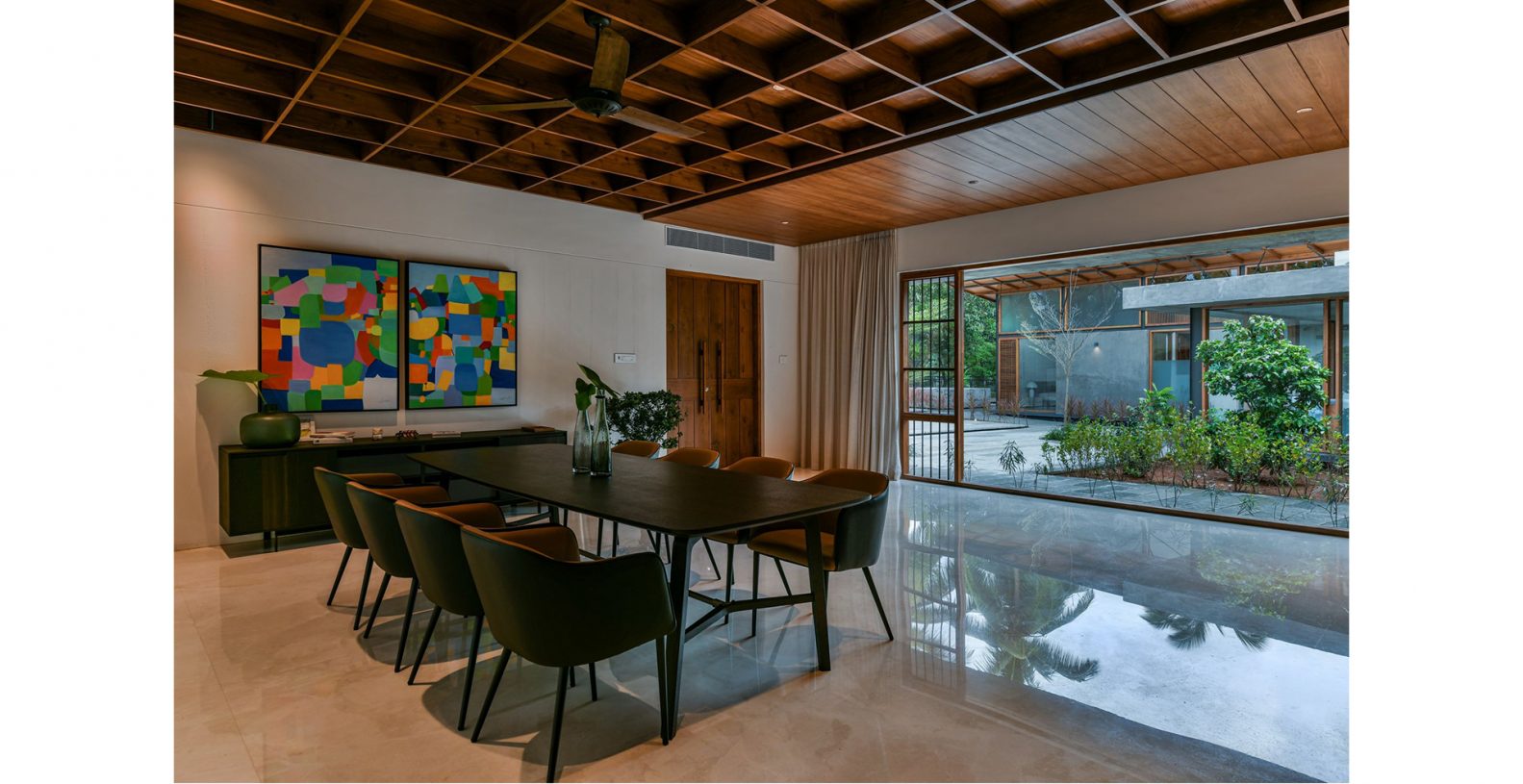 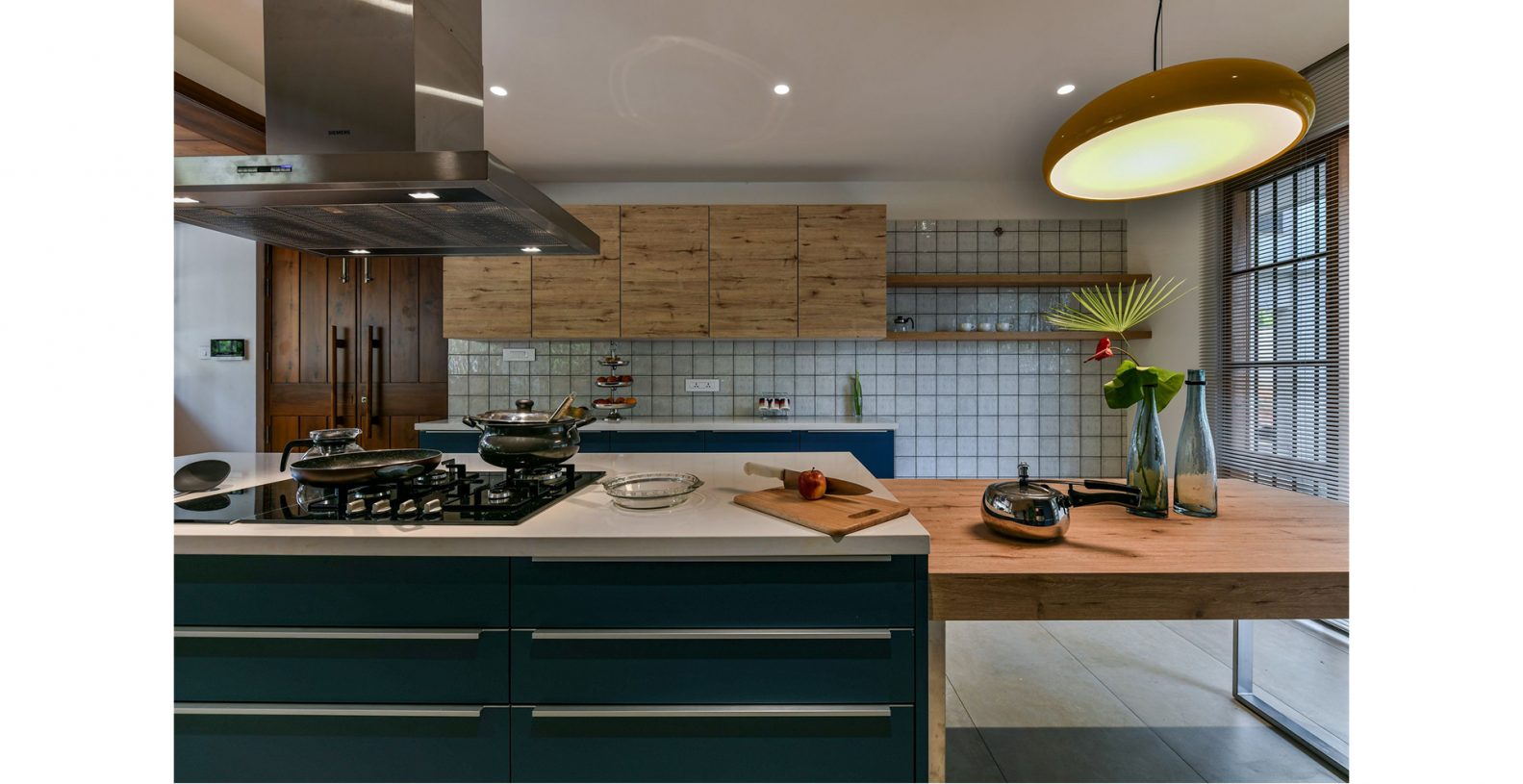 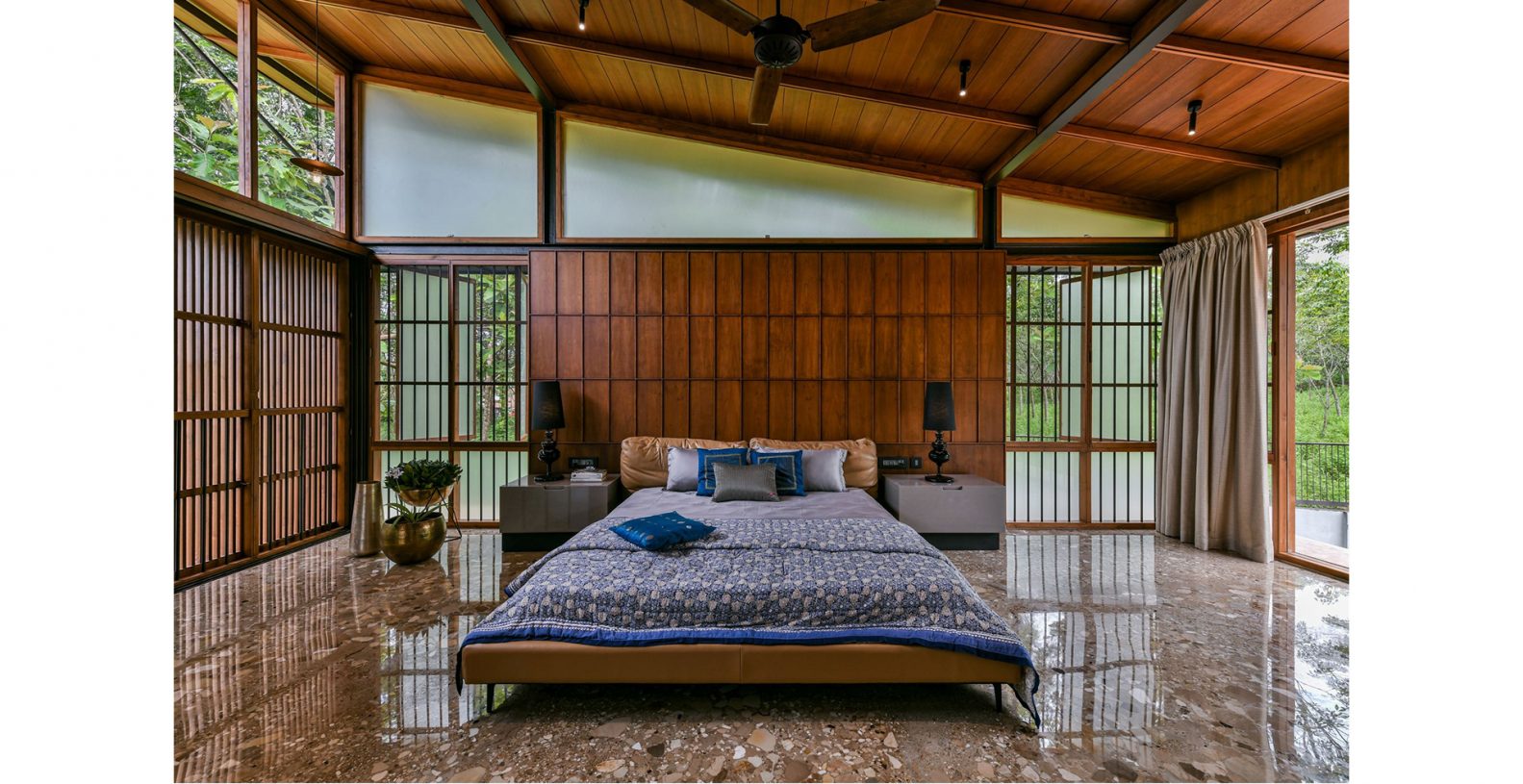 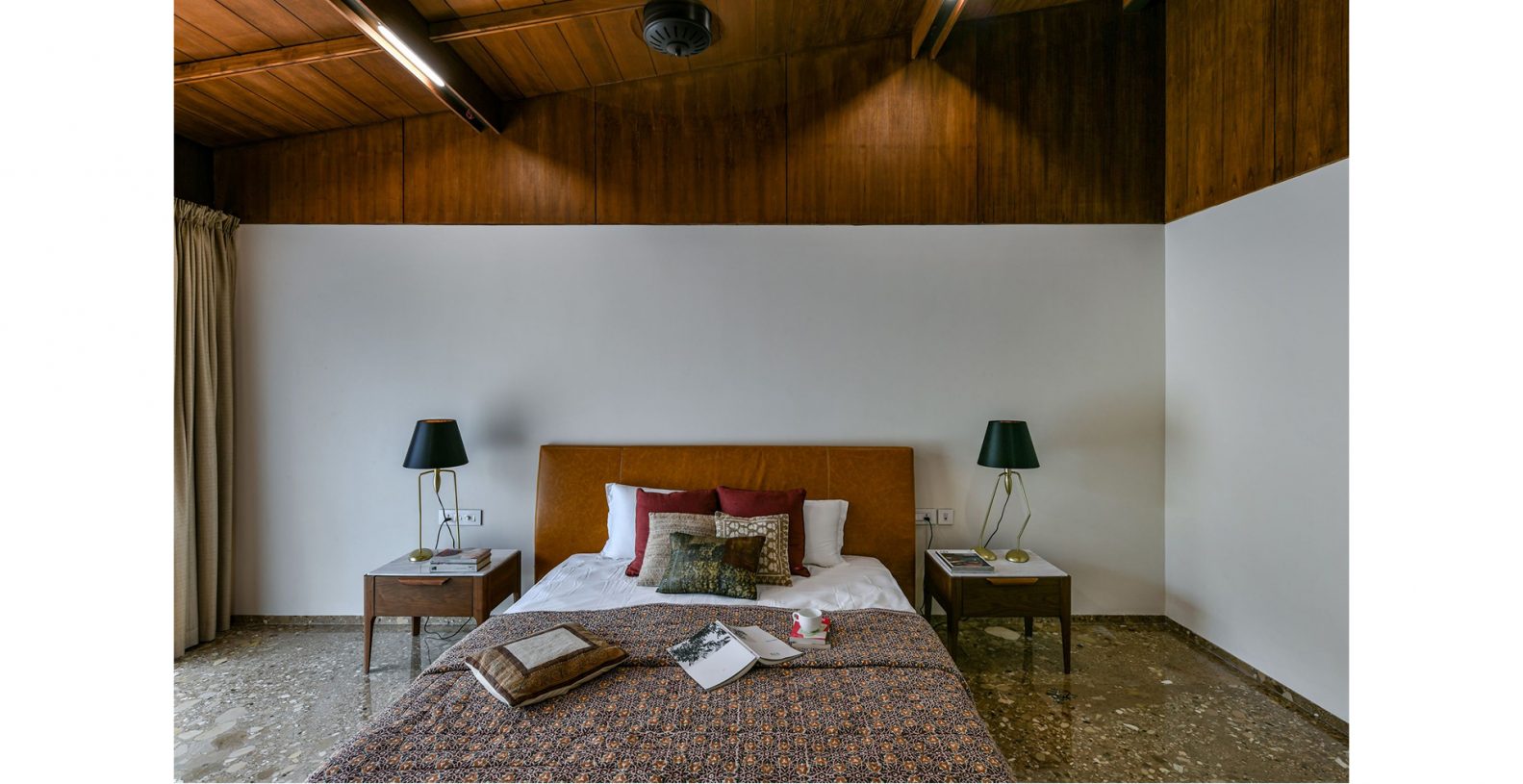 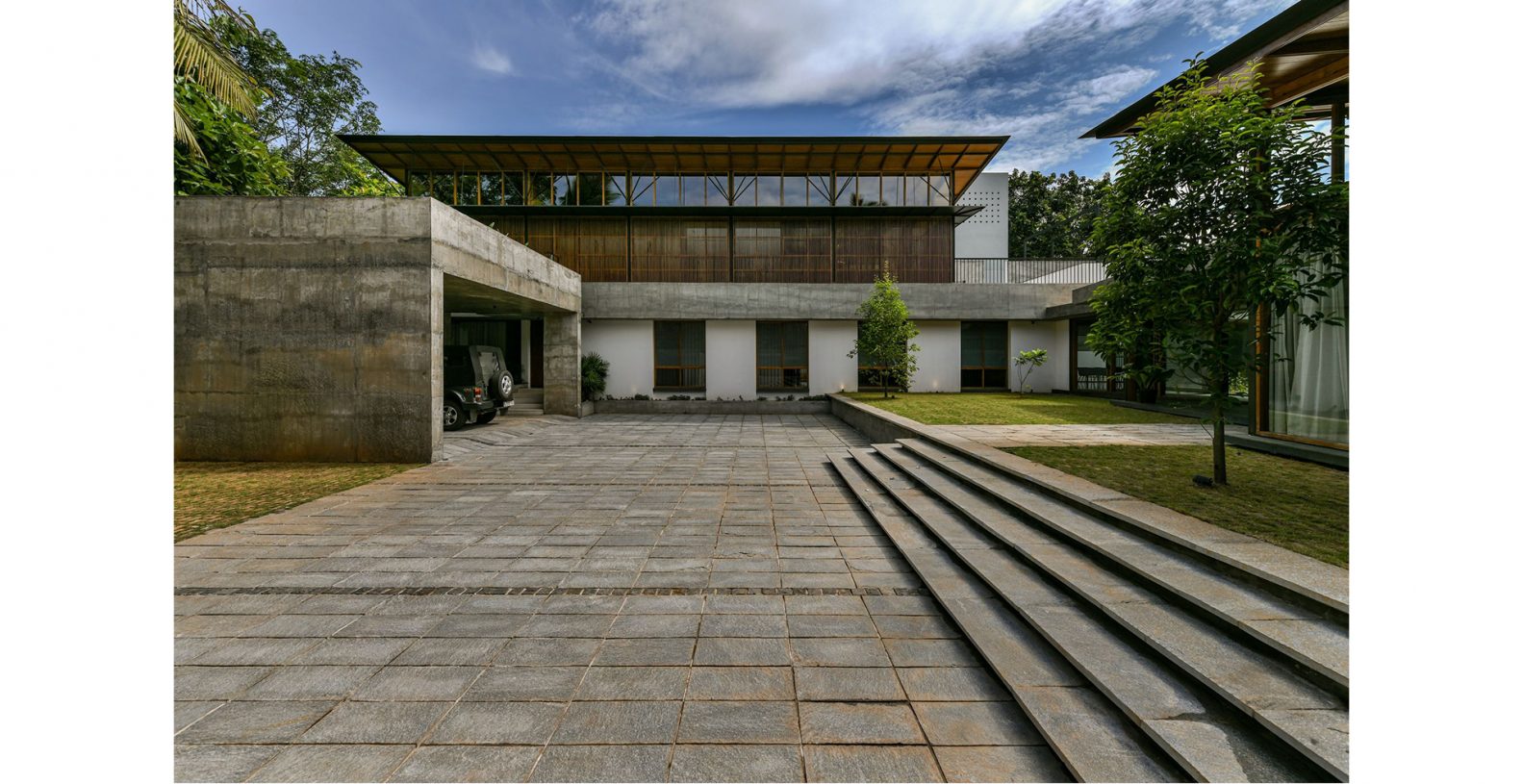 The Skew House by Thought Parallels

The Skew House by Thought Parallels derives its name from a unique composition that disrupts the parallel axis between the guest and family spaces, to accommodate a prayer room in the traditional, religious direction. The vernacular, sloped Mangalore-tiled roof is complemented by an earthy palette of wood, steel and exposed concrete. An intricately crafted central staircase, swimming pool and detailing in the form of exposed clay brick walls, mosaic marble flooring, louvered shutters, horticulture and distinct paving are other highlights of the residence. Scroll down to read the architects’ insights.

Driving through winding narrow roads in Malapuram district in Kerala, brings us to the site overlooking lush rubber plantation, which is abundantly grown in and around gradual slopes, camouflaging the house from plain view. Spread over an acre of land is this residence, which has a modern tropical design amalgamated with traditional architecture. The design of the house utilises the extents of the plot exceedingly well by having a well conceptualised, spread out spatial composition. The design accommodates the brief of the family, which was to create distinctive guest and family spaces. This clearly leads to the formation of two blocks.

Connected to the main block by a semi-private living space, the guest block houses a living area, prayer room and bedroom, arranged in a linear format. The presence of the prayer room prompted the architect to align the block along the traditional direction of prayer, thus creating a tilt and breaking the initial parallel axis between the two blocks, and hence deriving the name ‘The Skew House’.

Views of the minimalistic horticulture and the combination of both hard and soft paving from every room is another dimension added to the design. Rooms are well lit and aerated with large open spaces around. The subtle slope of the traditional style Mangalore tile roof makes the entrance verandah and inner spaces well proportioned in terms of height. The connecting semi-private living area is a cozy space, with doorways opening onto the landscape on either side.

On entering the family block through the connecting semi-private living area, one is welcomed by a large living and dining space. The linear arrangement of spaces continues, with the placing of the staircase followed by two bedrooms on one side and a kitchen and other utility spaces on the opposite end. This linearity in the arrangement of spaces brings in natural illumination and ventilation.

A wooden, steel, and exposed concrete, open staircase leads upwards to the first floor. A design element in itself, the staircase has a steel railing with a traditional wood carving pattern cut into it, which is a subtle but impactful addition. Located on the first floor are two bedrooms and a linear pool.

The south-facing facade of the bedroom and corridor leading to the bedrooms have been adorned by louvered openable shutters to keep out the harsh glare and heat, but also create a dramatic play of light.The use of the Mangalore roof tile roof along with an inner lining of plywood helps in insulating the rooms from the harsh summer heat as well.

The material palette has been kept very minimalistic, with steel, wood and exposed concrete as the primary features. A few elements such as exposed clay brick walls and natural mosaic marble flooring add value and enhanced quality as well. 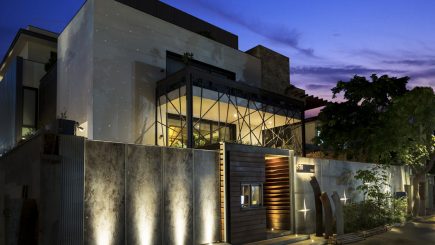