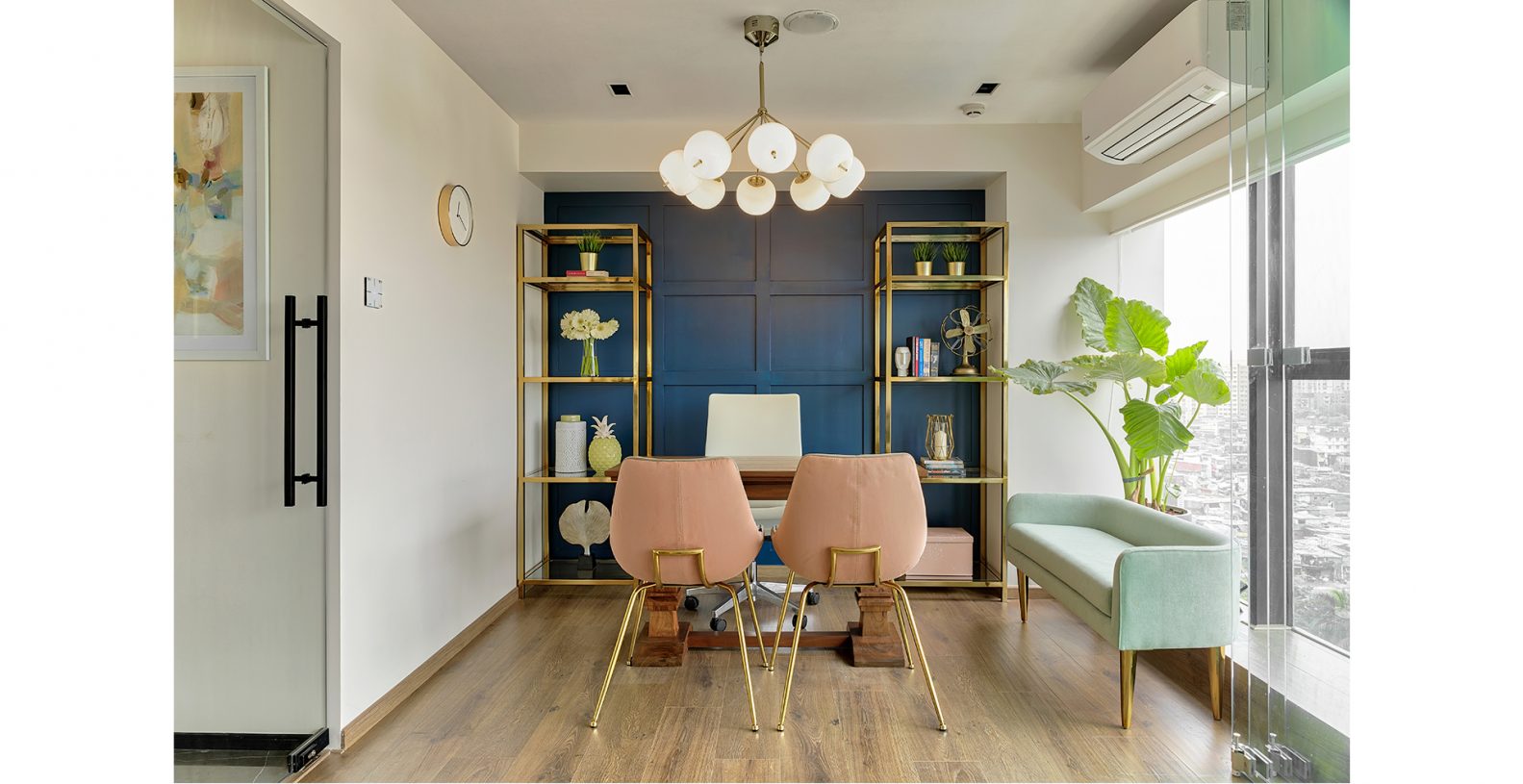 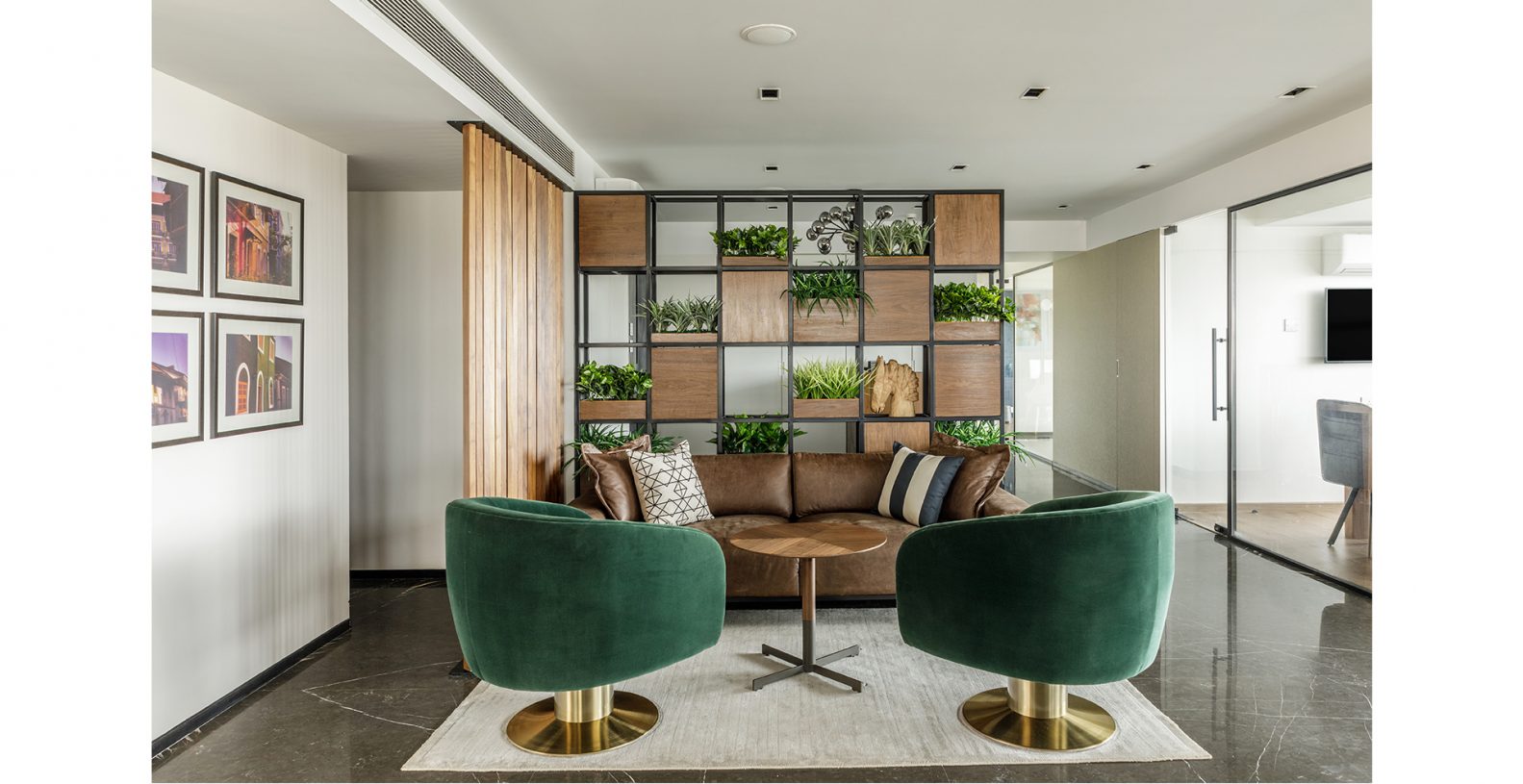 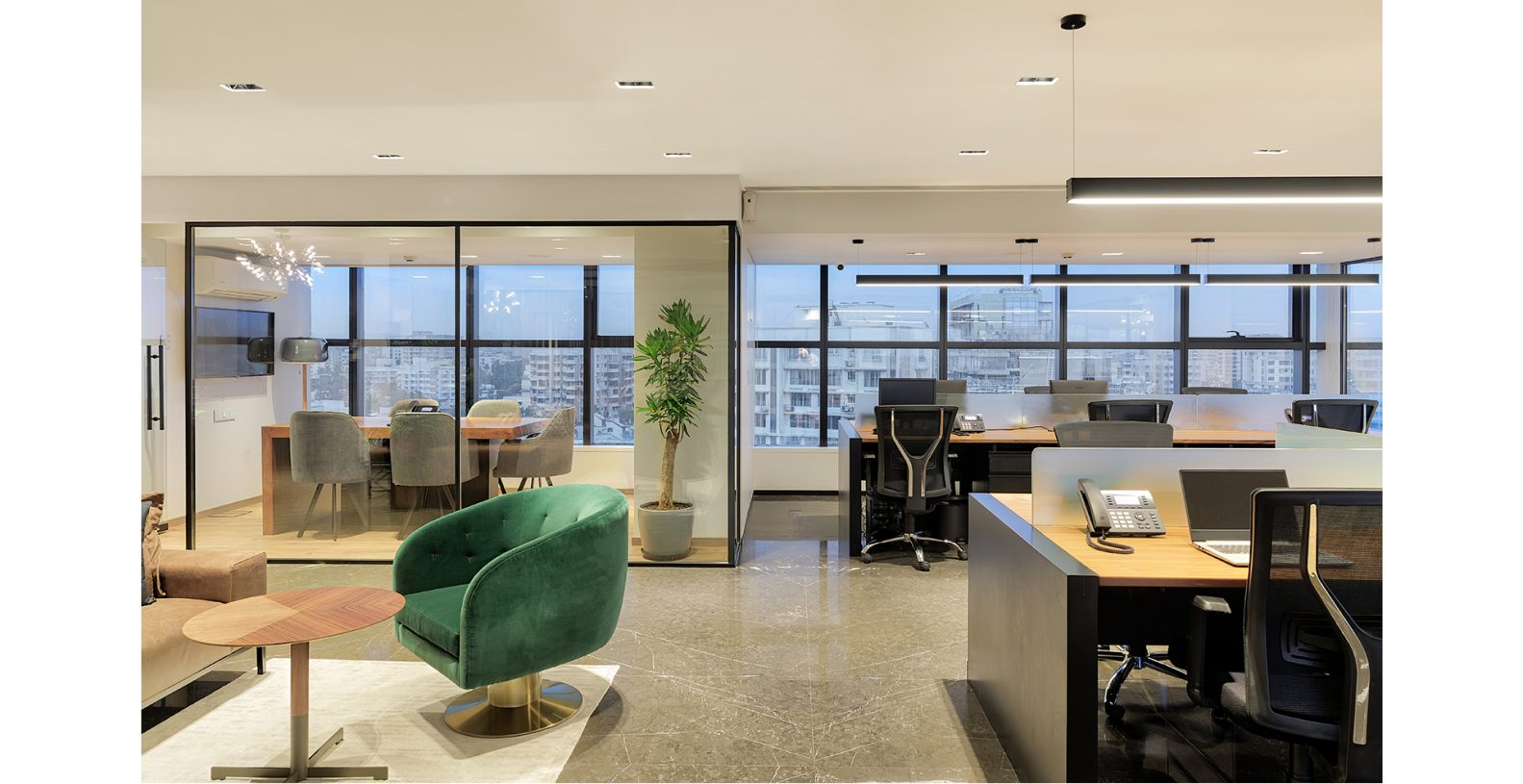 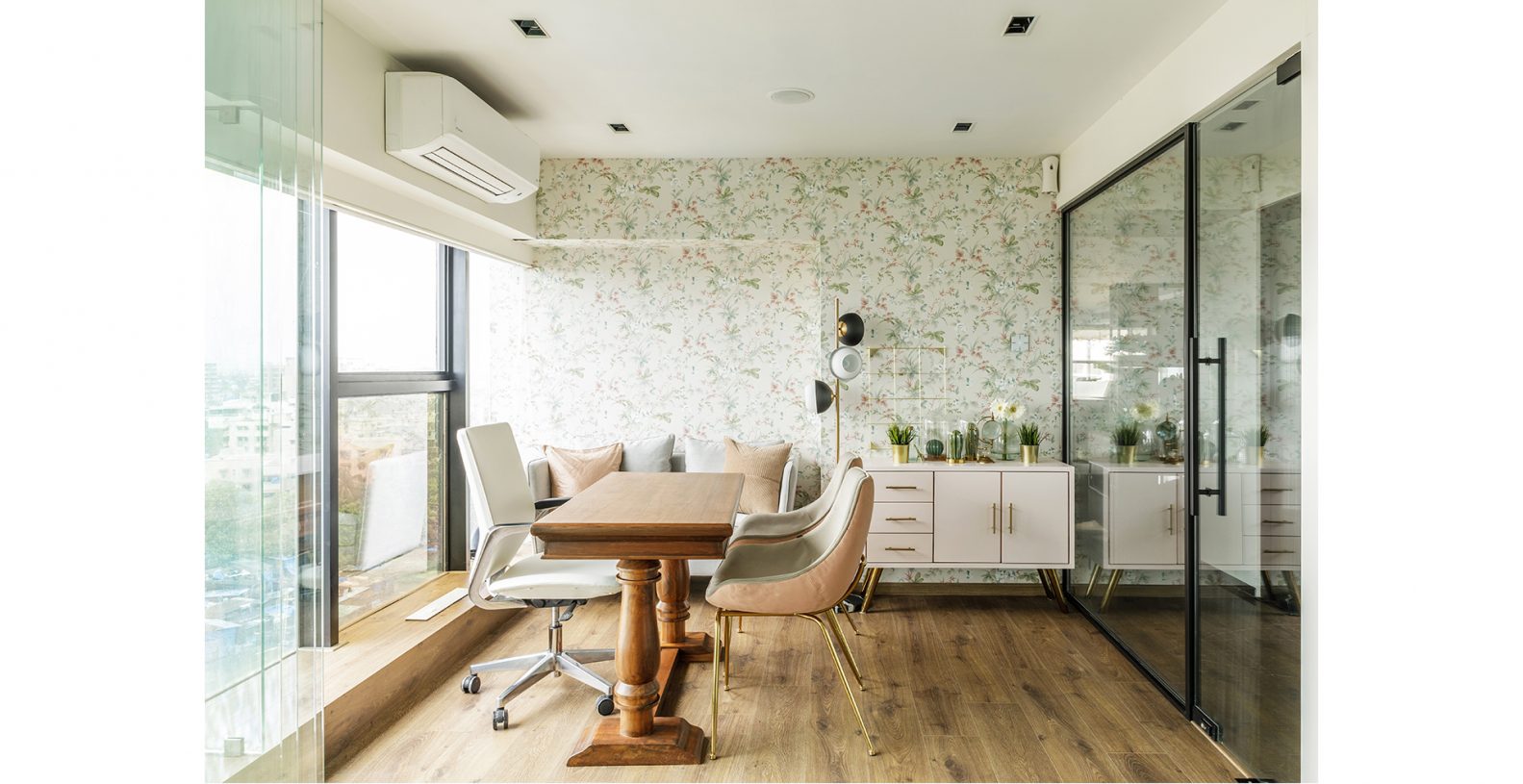 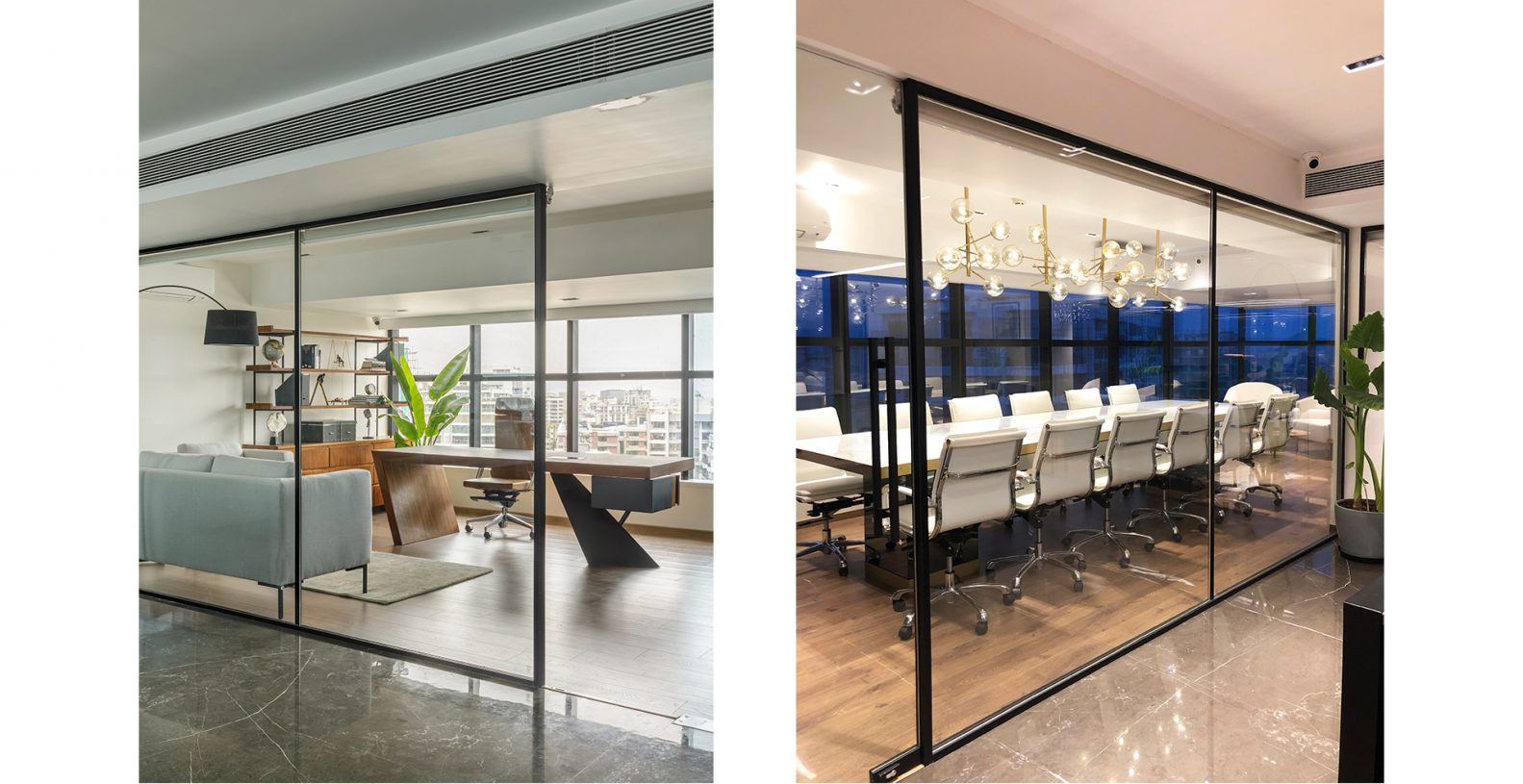 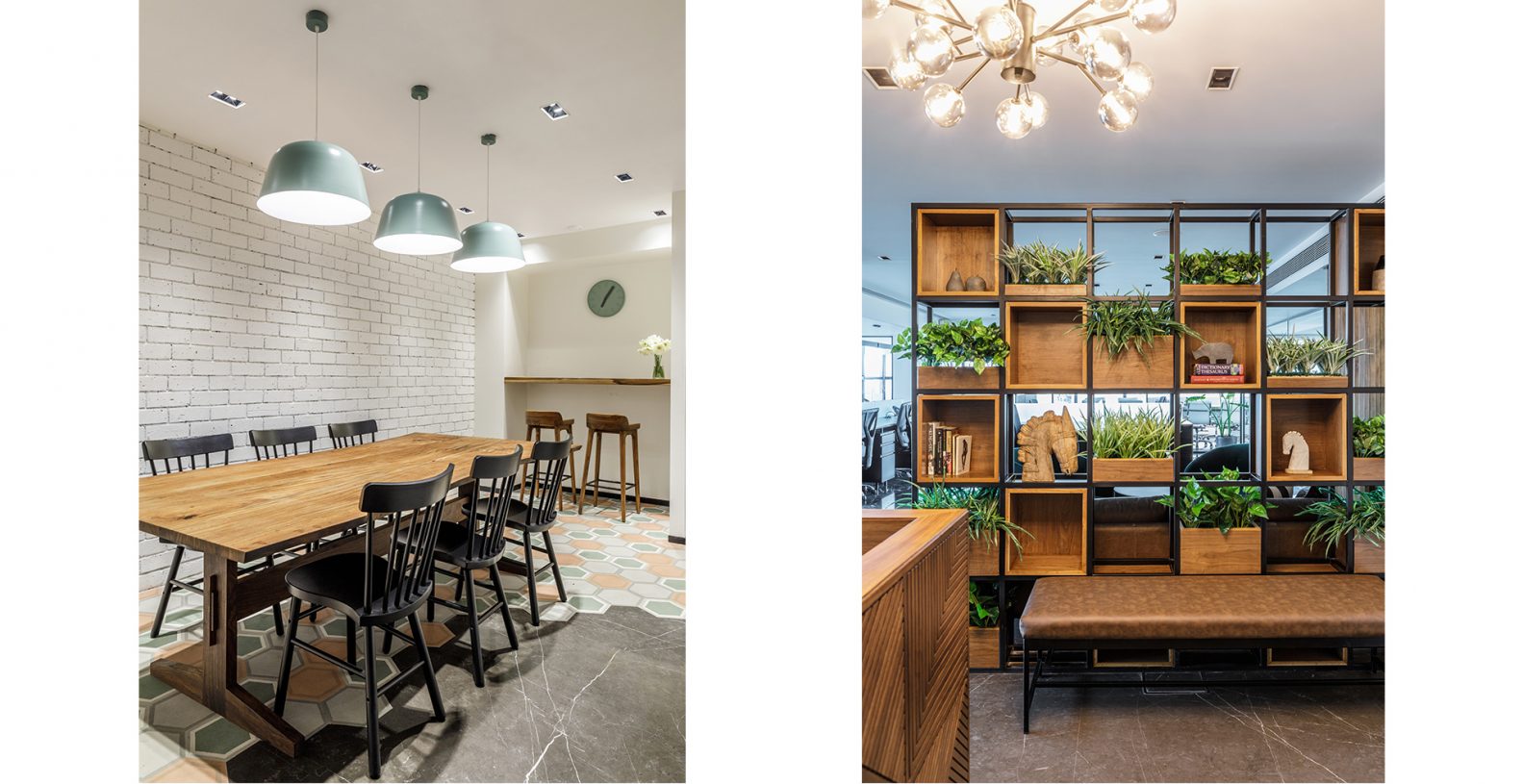 Office with a View by Quirk Studio is a premium, minimalist and indisputably contemporary working space

Office with a View by Quirk Studio in Juhu, Mumbai is a premium, minimalist and indisputably contemporary working space that houses the distinct offices of a father and two daughters within the same premises. Although the respective briefs were unique, the studio has woven a harmonious synergy between all the spaces by adopting an eclectic mix of luxurious furnishings in materials such as metal, glass, brass and leather, and immutable nature-inspired elements such as exposed brick, handcrafted cement tiles and a recurring palette of greens. Scroll down to read the Studio’s description of the project.

Nestled in the suburb of Juhu is the Office with a View; an eclectic and unique space amidst the bustle of Mumbai. The client wanted a space that is premium, luxurious, contemporary yet modern and minimal in design. He also wanted a section within the same office for his two daughters running their respective businesses. The brief for the daughter’s offices was to add a feminine touch to their space, through furniture, colours and material. With both briefs being distinct, an approach to design the overall office as two separate spaces was adopted with a modern contemporary design style that would seamlessly tie all the spaces together.

The main office that seats about 15 employees, allowed the designers to be generous with space; the layout was designed keeping in mind the openness and the inherent natural light. Hence, the placement of the cabins, conference and meeting rooms is all on the periphery of the right wing with clear glass DGU partitions and defined black metal frames, which divide the central space into an informal discussion area and seating space for all staff.

In order to craft a premium and luxurious space, the designers chose a dark grey marble, walnut veneer and wooden flooring, as well as different types of metal, such as black metal & gunmetal with hints of brass. For the MD’s cabin which stands out as the focal point, the main desk was customised with a metal base and a wooden top, finished with leather in the centre. For the large 12-seater conference room, a decision was made to go predominantly white, customising the main table with white Statuario marble with a brass edge detail and tinted mirror base, white leather chairs, white sofa chairs, juxtaposed well with 4 statement brass body bauble chandeliers. This took advantage of the all-encompassing large windows that surround the whole office, ensuring to create a synonymy with natural light that was abundant to the space.

The left wing of the office was divided between a pantry/café, the two daughter’s cabins and a small praying/storage area. The two cabins for the daughters have been placed besides each other; similar in look and feel a sliding folding glass partition segregates the two, so that the space can be used as one or separate spaces depending on the requirements. Softer pastel shades have been used with only one panelled wall that stands out as an accent in an oxford blue shade, floral wallpaper, while tying up the space with brass metal elements. The Pantry/Café has been designed to keep the space light, bright and fun. An exposed brick wall finished in white stands out, with the flooring in the same dark grey marble spilling from the outside area and blending with the sage and coral hexagon handmade cement tiles.

To demarcate the entrance and reception from the rest of the office, a planter wall made of metal and wooden boxes has been created, without compromising on the openness of the space. The main door has been inspired from the steel business of the clients and is finished in black gunmetal sheets; Weighing 200kgs, this door makes for a grand entrance statement. The private lift lobby continues to carry forward the same language as the office interiors.

The bathrooms have been designed with elements that are luxurious, yet nature-inspired. A dark patterned leaf wallpaper and sage green subway tiles along with textured grey IPS on the walls, all come together to create the mood that the designers set out to achieve. To take the luxury quotient higher, Automation is adopted to create a Modern, smart office. The designers tethered the entire office using a lot of greens throughout, right from the entrance to the restrooms, which immediately adds a burst of colour and warmth to the space, while connecting the inhabitant to nature outside and enhancing the overall well-being quotient. 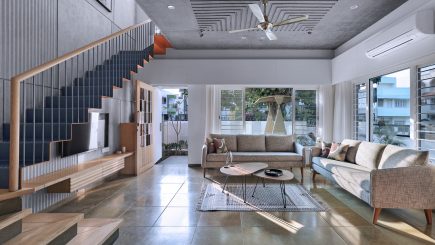 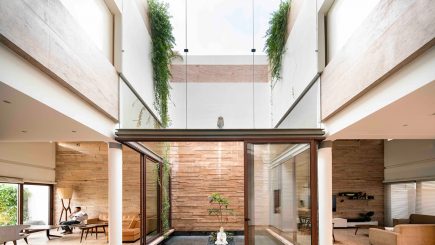 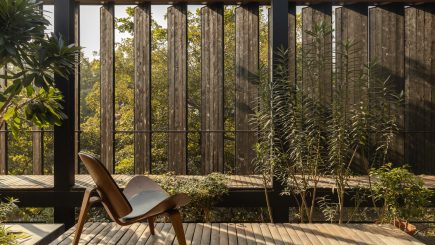